Restoring a family heirloom is a daunting task, especially if the heirloom is a B33 which spent a decade wrapped up in a plastic paddling pool. Read how Andrew J Davies rose to the challenge as his restoration tale unfolds…

I was always the helpful sort, even at 10 years old. The Bike is deserving of respect because of its elevated position within my family – it precedes my sister by four years, and anticipated my arrival on the scene by a full decade. I was the last addition to the family, and I know my place. To all intents and purposes, it was a family member and it has always been referred to in hushed and reverential tones as The Bike or by its pet name, Betsy. Isn’t it strange then that it should have been allowed to decay as it did?

The Bike was the second machine my Dad owned. The first was a 350cc AJS but no one seems to remember precisely what model. I think my parents are still in emotional denial because it was such a heap. My Dad grimaces when it is mentioned and is clearly still in some mental anguish over the matter; he says the bloke who sold it to him saw him coming. I gather it was a bit of an old nail even then. My mother went through a lot of denture fixative in those days, so bad was the vibration. She remembers the rigid frame sending waves of agony up and down her spine, but in the mid-50s even an unreliable boneshaker with girder forks marked them out as something slightly out of the ordinary.

Amongst my parents’ society at that time, owning a bike made them a little bit special, and special indeed was the opportunity to ride off into the North Wales hills of a Sunday after six days of graft. What pleasure it was to punctuate every outing with an hour’s roadside repairs. The AJay served its purpose but its day was done. On 28th May 1955 with uncharacteristic canniness, my Dad persuaded Mr E Wilson (salesman) of Victor Horsman’s of Renshaw Street, Liverpool, to take the AJS off him as part-exchange for a brand new BSA B33. They gave him £12.0.0 for it and I think my Dad feels he exorcised a demon that day. The price of a new B33 at that time was £202.4.0, and with £88.10.6 of saved cash handed over that left £108.0.0 difference to be paid on hire purchase. Once the HP charges of £10.16.0 were added on, this particular electrical fitter had to find £9.18.0 every month for a year to hand over before he could call The Bike his own.

I have the HP repayments card and every installment was met on time. I doubt my mother would have let him default because this new maroon ‘magic carpet’, as she still calls it, was everything the malevolent black AJS was not. It had a swinging arm and a proper, upholstered dual seat and she no longer lived in fear of her retinas detaching.

I think The Bike is probably the main reason for my being here. I am not being metaphysical when I say that, but the fact of the matter is that they were married not long after the BSA arrived. Perhaps it was motorcycling comfort which won her over and not promises of riches. The house my parents bought together, where they still live, where The Bike festered like a retro-technological Ground Force garden feature for 30 years — and where I was born in the sitting room — cost a little over £2000, so The Bike cost roughly one tenth of the property. That is just about right today too, an inconsequential lemma* that appeals to me.

Well, one thing led to another, my sister arrived and then me, and The Bike’s life had become one of a ride-to-work beast of burden, rather a come-down from the Arabian Nights magic carpet status it held during its early years. However, in the late 60s a Ford Anglia was considered more sensible family transport, and The Bike was lovingly embalmed in grease and sealed into a sarcophagus of polythene sheeting and tarpaulin. We didn’t have a garage to put it in, so various items, including my old paddling pool at one stage, were pressed into service to provide token protection from the elements. The Bike was given the new duty of holding up the garden shed – from the outside.

My parents, but mainly my mother, continued to speak lovingly about The Bike but for some reason it did not seem strange that despite such eulogising the machine was never used. It was like living with an old and decrepit maiden aunt who was of neither practical nor ornamental value, but whom was still revered and respected.

You Reap What You Sow

I was surprised and delighted to be told I could at last: the only time the mechanical mummy was unwrapped normally was for Dad to kick it over, perhaps yearly if it was lucky, to keep the oil galleries wet. On these occasions, my Mother would gaze misty-eyed from the kitchen window and go off into a reverie of journeys to Devon, Yorkshire Dales and the Lake District. So I washed the nasty old grease off, and she (the bike, not my Mother, obviously), looked great underneath.

However, The Bike did not look so great 20 years later, by which time I had done O-level chemistry and understood what happened when water and iron encountered one another. But whose was the greater crime? Was it mine for washing it or someone else’s for letting me? I suppose my pleading must have become too much, I have a child of my own now and I know what psychological powers a single-minded youngster has. When I got a house with a garage, about four years ago, I thought it was time to right the wrongs I had perpetrated in my innocence. Besides, it was time to let the shed finally collapse.

But I knew no mechanics, other than what I had picked up from my Dad. I am no tradesman: handy, but I have no workshop skills. My Dad was very sceptical, but three years ago, he let me have The Bike. This is the greatest gift my parents have bestowed on me, although they have been careful not to burden me with any expectation, Dad has said; ‘Don’t lose any sleep over it, just scrap it if you want’.

As if I could! My sister would have my guts for garters.

I simply did not know where to start. Should I do the frame or the engine first? Should I farm the work out? What sort of end product do I want? Who am I and why am I here? In case you are ever in the similar position of having more enthusiasm than ability, I thought you might take heart from someone else’s mistakes. Ask any soldier; it is worth having someone in front of you when crossing a minefield. And for those of you who do know a thing or too, the tale might give you a laugh (please don’t scoff in silence though, I am not too proud to accept advice).

The rebuild, restoration or renovation, chose your favourite term, is not finished yet: I am realistically intending to have her running for her 50th birthday, in 2005. That seems fitting – and achievable even for me.

Please feel free to send advice and words of encouragement, or disbelief at my ignorance, to ajd@oldbike.org. I’m definitely not too proud to accept charity!

To be continued (I hope)… 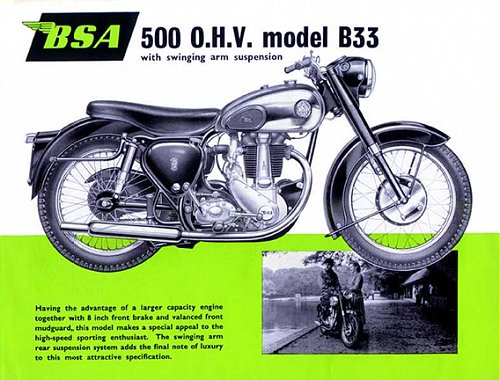 *Can anyone tell me what a ‘lemma’ is? Not one I’ve heard of previously. TP