One of life’s genuine real classic riders rode over the horizon in early 2011. Jim Reynolds pays tribute to him…

Bruce Pollard and the Big 4 Norton he’d owned since 1972 were inseparable friends. When hundreds of his bike-riding friends gathered to say goodbye to Bruce in May 2011, that faithful old rigid framed 60 year old sat in the back of the church to hear tributes paid to the man who’d ridden it all over Europe to countless rallies. Bruce was almost part of the furniture at the Dragon, and the Panther Owners Club made him an honorary member because he delighted in turning up at their events on this scruffy old sidevalve with its 120mm stroke and telling them their 650s were short strokes.

The old photo shows Bruce back in 1974, snapped en route to the Dragon Rally. As you can see from the other old picture, taken in 1976 in the south of France, Bruce and his Big 4 are a well-travelled pair indeed. Bruce purchased his Norton single for the princely sum of £15 (including tax and MoT, as you’d expect) in the 1970s. In a conversation with this magazine a little while ago he told us that he loved its ‘reliability and simplicity.’ Bruce needed to overhaul the engine a couple of years back ‘because parts had actually worn out over the years.’ 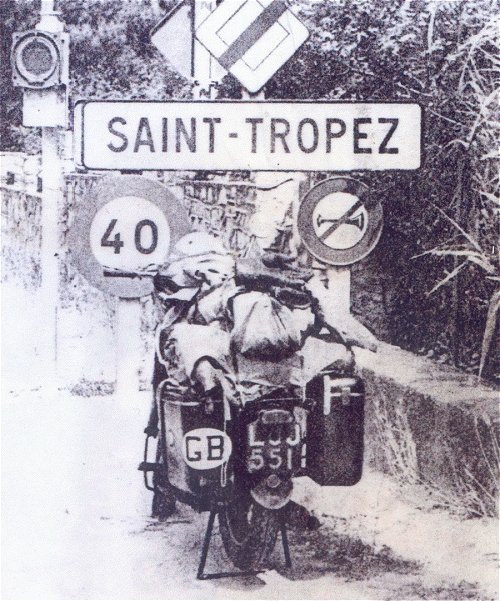 Bruce pulled a trailer to distant or long events, carrying tent, stove, tea, coffee and so on – he was known to serve tea at the Malvern Show in a bone-china tea service which commemorated the Queen’s coronation. Fittingly, he won the ‘Best Teapot’ award in the Norton Challenge a couple of years ago.

When he introduced me to the Dragon Rally he included a beef stew that went on the stove and attracted his many friends with its odour. The smoking jacket and top hat he wore as host gave a touch of class to such occasions. Bruce would ride to shows, both bike and steam gatherings, park up one very oily old Norton with a photo album of his many trips for people to browse through in wonder, then wander off wearing the clogs he’d been given for the Long Distance award at a Dutch Norton rally. 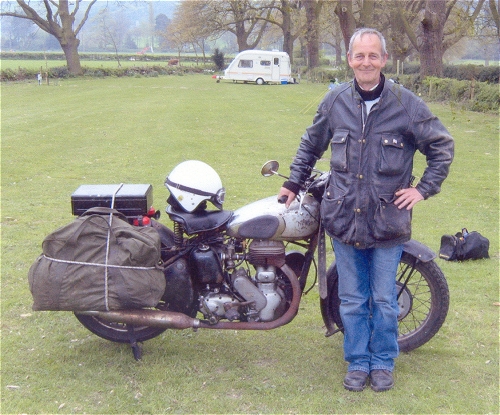 A regular RC reader, Bruce delighted in sending obscure photos for the Norton Challenge. Perhaps the best of these featured his parrot which attended the VMCC’s Founder’s Day on his shoulder, much to everyone’s astonishment.

A collection of music that could best be described as eccentric – much ruder words were used – could be used to entertain friends or get unwelcome guests to leave. When he was very ill with motor neurone disease, one lady he didn’t take to was persuaded to leave by him playing ‘Jump Up and Down and Wave Your Knickers in the Air’ several times. She took the more decorous option and left.

Bruce’s final bike journey was in his coffin, on the sidecar of an elderly Norton, which broke down. He was transferred to the back-up hearse and made his friends smile by being late for his own funeral. He was carried in to the sound of Monty Python’s ‘Always Look on the Bright Side of Life’, the musical interludes were Charles Penrose’s recording of ‘The Laughing Policeman’ and friend Sally Newman-Kidd singing ‘Amazing Grace’ unaccompanied. In between there were tributes before he was carried out, past that faithful old Norton, to the sound of Hawkwind’s ‘Silver Machine.’ Like Bruce, the whole thing was a class act.

And Bruce was also renowned for groanworthy jokes. Let this be the last one dragged out of his collection:-

A farmer went out one morning in the very cold spell we had earlier this year and found all his cows frozen to the ground, unable to move. He clasped his hands, looked up to Heaven and said: ‘Please God, help me out of this mess.’

God heard him and a woman appeared, who walked amongst the cows, touching their backs, and as she did so each cow moved and began grazing. The amazed farmer turned to the woman and asked: ‘Are you my guardian angel?’ 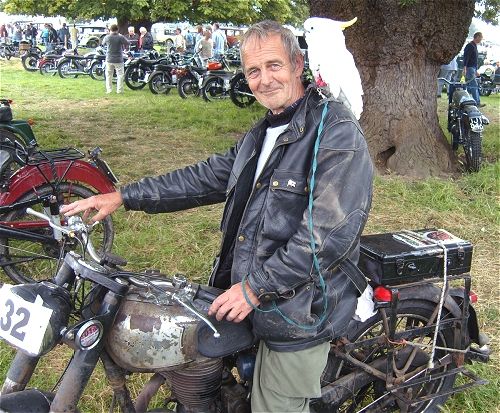