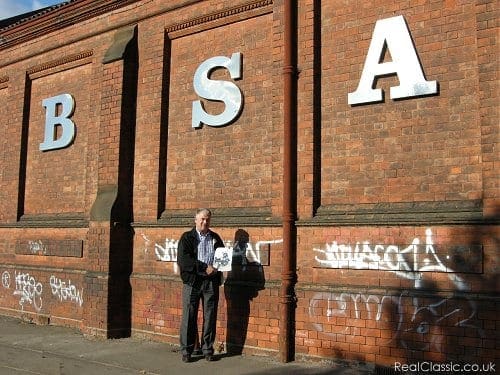 Familiarity breeds… you know. Roger Houghton, a visitor from South Africa, takes a fresh look at the UK while he visits its classic motorcycling heritage sites…

I am a classic motorcycle nut and my dream trip was to visit the ‘pilgrimage sites’ of the now virtually extinct British motorcycle industry – once the largest of its type in the world. At one stage the UK dominated not only motorcycle production, but also all forms of motorsport involving motorcycles, even those fitted with sidecars. These days, the jewel in the crown of UK motorcycle production is the reborn Triumph operation at Hinckley, near Birmingham.

My visit to the UK from South Africa included a visit to the impressive Hinckley plant. It was wonderful to see what the drive, enthusiasm and putting-his-money-where-his-mouth-is of one man – construction magnate John Bloor – has been able to do in taking the fight to motorcycle manufacturers in Europe and the Far East. He bought the Triumph name and what remained of that once-great company in 1983. Bloor, who made an initial investment of £80 million, has worked a modern day miracle. He reinvented the company on modern lines and in 2007 Triumph overtook BMW as the top-selling European motorcycle brand in the United States, a position it had held way back in the 1960s.

My visit to the UK also gave me my first opportunity of driving solo in this smallish country which has more than 35 million registered vehicles. I had heard horror stories – particularly about driving on the M25, which has the nickname of being the world’s largest parking lot! I needn’t have been nervous at all. What a stress-free experience it was. Far better than my usual drive up and down the N1 between Rivonia Road and Beyers Naude. During the four days I was travelling around England on my own I did not see even one collision or any recklessly driving or irresponsible speeding. I covered more than 1000 km and drove through villages, cities, on the motorways and on the glorious, twisty B-roads.

What I did find is consideration for other road users, courtesy and patience. Nobody hooted at me – even when I got flustered occasionally at a multi-exit roundabout; there are evidently thousands of them in this country. There was no passing on the left and on the motorways the traffic sticks to the ‘pass right’ and ‘keep left’ dogma.

Then we get on to a pet hate of mine: robots (traffic lights in UK speak) that are out of action or staring at you with only some of its ‘eyes’ (light bulbs) operative. We all see this problem every day in SA. But, lo and behold, I never saw one traffic light that was not working, or one with a bulb that was not glowing brightly. What an absolute pleasure.

Something else – besides dense traffic – which one hears about when going on a trip to the UK is the interminable rain. Believe it or not, but I had no rain – other than a spattering of a few drops on the second day in the UK – in almost two weeks. What a pleasure!

What also impressed me was the general cleanliness, the well-maintained and well-marked road network – even tarred roads leading to farmhouses and country estates! And the collection of wheelie-bins in remote areas! Amazing! This is obviously what is meant by a First World Country. 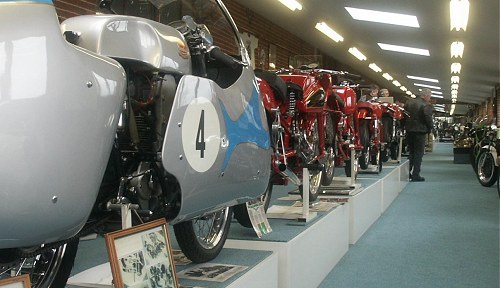 My travels started at the Sammy Miller motorcycle museum in the south of England. This is a wonderful collection, with many unique exhibits of complete machines and components. Of particular interest were the various versions of racing 500cc Nortons that the company experimented with in the battle to stay competitive with the multi-cylinders from European and Japanese manufacturers. We also met Sammy himself, a man hundreds of wins and a multitude of titles from all types of motorcycle sport. He is a fascinating man who continues to restore old motorcycles himself and he will be racing in the historic events in SA early next year.

The next three days were spent at the Goodwood Revival meeting, where we had to dress in the fashion of the 1960s to fit in with the racing cars and motorcycles, which were up to 1966 this year. This was another amazing experience and one that I believe can only take place in England.

The rest of the days were spend chasing grey porridge at museums such as Brooklands, Heritage Motor Centre, National Motorcycle Museum, Coventry Transport Museum, Black Country Living Museum, Donington Museum, Ace Cafe and the London Motorcycle Museum, as well as standing on the ‘hallowed ground’ on the sites where Triumph, BSA and Velocette motorcycles were made in the ‘good old days’