Are you a TT enthusiast? Geof Staples reviews the story behind the Clubman’s TT races and reckons this book will fascinate you…

I was very pleased when this book dropped through the letterbox, as it fills a gap in my knowledge of the TT races. It is quite a large volume, in softback, a little more than 10″x7″ in cover size, with 264 pages of text and photos.

Many have heard of the Clubman’s TT, but there has, until now, been little available in print about it. This book addresses this lack of information most admirably.

The story of these races is told by the authors, with a well-written and authoritative text, and by the reminiscences of many of the riders who took part in them.

These were a rather remarkable series of races, as the riders were not international stars, but genuine real life clubmen, some with no racing experience, let alone experience of riding the most (in)famous race course of all.

The bikes used were showroom standard bikes, as they came out of the crate in other words. These bikes and their riders were then pitted against the TT course. A real baptism of fire. For some strange reason, some manufacturers were not keen supporters of the idea!

Although the modern TT races have their equivalent in Supersport and Superstock races, there is no equivalent in the riders. It would be far too dangerous today, with the performance of even stock 600s being far in excess of the top works GP bikes of the 1950s and 60s.

Much of this book is devoted to facts and figures and blow by blow, lap by lap accounts of each race. I have to say that I enjoyed this format, having read many of Geoff Davison’s (founder of the TT Special newspaper) books about the TT and MGP, which summarised the races in a similar way. However, it does not appeal to all, and this book will mainly suit those who want to learn the full history of the TT races, and have an abiding interest in them. 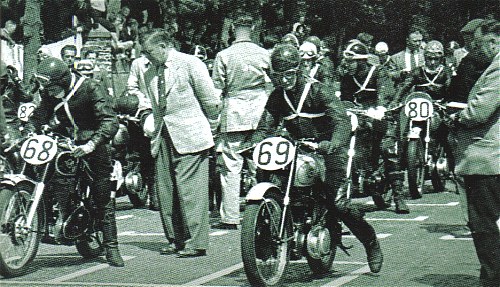 To someone like me, brought up on a diet of TT, MGP and Southern 100 pure road racing, this book is almost heaven. Many racing stars of the 50s and 60s had their first crack at the TT course in the Clubman’s race. I hadn’t realised until I read it quite how many, nor how many of the competitors I had actually met over the years.

Quite a few of the competitors tell their own stories in this book, and they make some entertaining reading too, with humour and humanity. They tell a tale of a different time, when Health and Safety hadn’t been invented, and authority was not so heavy handed on ‘high spirits’ but, more than that, they provide a window into the past, and the era which produced some remarkable men and bikes.

(TT racers had a reputation sometimes as hell-raisers. Mike Hailwood and Bill Ivy amongst others got up to a few interesting exploits, there was a legendary one involving a new Ferrari, a TT course wall, women and probably too much to drink…)