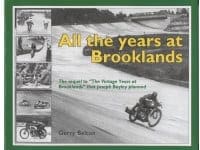 Just in time to celebrate Brooklands’ centenary, Jonathan Hill has found a splendid hardback book packed with rare images of racing from the 1920s…

Published in 1968, Dr Joseph Bayley’s renowned book ‘The Vintage Years at Brooklands’ is a photographic record of motorcycle racing there in the 1920s. It reflected his years of observing and photographing

the men and the machines of the time and led to his becoming the acknowledged authority on motorcycle racing and record breaking at the famous track.

Some years before he died, aged 93 in 2000, he had outlined a second book, this time covering the entire history of motorcycle racing at Brooklands from the earliest days of 1908 until the track’s closure in 1939. Unfortunately, his advancing years were to frustrate his plans.

With the approaching Brooklands centenary in mind, Anthony Bayley decided that his father’s book should be completed. This task was taken on by a family friend, Gerry Belton, a member of the Brooklands Society who, advised by Joseph Bayley, had restored the ex-Bill Lacey 1927 Grindlay Peerless-JAP record breaker which is now in the National Motor Cycle Museum.

This fine quality hardback book contains over 130 full-page photographs, many unseen before from the unique Bayley archive. The orthochromatic film, as used in this period, gave superb detail and contrast, adding greatly to the characters portrayed — you can almost smell the Castrol R! The book is full of hidden gems… how many know that WO Bentley (later to be the renowned car manufacturer) was in 1910 a member the official British Indian team, and that the future King George VI, HRH the Duke of York, sponsored his chauffeur S E Wood on a 994cc Trump-Anzani?

In his text the author has set out to balance technical features of the racing machines with impressions of the many different characters, both professional and amateur, who worked on them and raced them on the unique 2.7-mile banked track in the heart of the Surrey countryside. As Anthony Bayley commented: ‘My father would have approved.’

All The Years At Brooklands by Gerry Belton