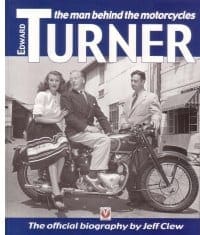 If you’re a fan of Triumph motorcycles, then you’ll enjoy this authorised biography of the man behind the brand, written by motorcycle historian Jeff Clew…

This is a new, softback edition of Jeff Clew’s detailed biography which was published a few years ago in hardback and with a slightly different title (you might want to check that you don’t already own it before splashing out on the new version!).

The chapters follow Turner’s life from his early days in Edwardian London, through his initial career breakthrough – a job with Ariel; the happiest years of his life; war, and all manner of problems; the debut of the Thunderbird; Johnny Allen’s record-breaking saga; the unit-construction twins, and finishes with Japan’s threat to the British motorcycle industry.

It contains some entertaining episodes which give an insight into life at Triumph with Turner at the top: 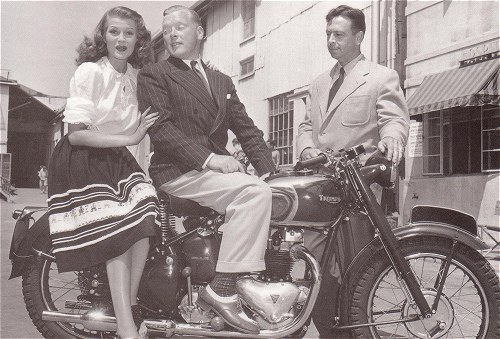 Occasionally, Edward would ride out with the testers and exchange bikes. Jack Wickes recalls one occasion when Edward put his head around the Drawing Office door and said ‘Wickes, I’m taking your machine to Whitley Common with Ballard and Nicholl to compare steering geometry. I trust it’s a sound runner?’

Jack’s reply ‘It is at present’ brought forth a knowing look!

An hour later, Edward put his head around the door again and said ‘I regret to say Wickes that during the investigation your girder front fork got bent. Get it repaired and borrow another machine in the meanwhile’.

He had been away from Meriden for about an hour and as Whitley Common was only a short distance away Jack had wondered why he had been away for so long. The reason was now all too apparent — Edward had been home to change his suit. As he walked away, his normal seafaring stride failed to conceal a limp! Both Ballard and Nicholls were too discreet to enlarge on the incident.

‘I wasn’t going to write a book review because, well, after I’d finished reading it I felt rather sad. The book left me feeling rather melancholy, which was not the reason I had for seeking it out in the first place.

‘I had bought it hoping to find out more about the engineering and design ethos of the great man himself. Instead, I realised that, despite his obvious talents, Edward Turner was a flawed man and like the rest of us he displayed numerous character weaknesses. Unfortunately his character weaknesses seemed to have put a stranglehold on development at both Triumph and BSA at a time when they could and should have been meeting the threat from Japanese makers.

‘Jeff Clew has produced a fine book which details Edward Turner’s life and that of the companies he worked for. The book is fairly light on technical details and is open and honest about this from the beginning. It left me with no doubt about Turner’s skills, but it also left me wondering what might have been if more engineers and designers had been allowed to develop their ideas instead of being constrained by Turner’s ever-present ego.

‘If you are interested in the history of the British motorcycle industry and the characters behind it, then this book should be on your list of books to read.’

‘Edward Turner, The Man Behind The Motorcycles’