Looking for an introduction to Norton twins? Marc Reibman has just the book for you (although he may be just a teeny bit biased on the subject – decide for yourself!)

I know it’s hard for Commando types to believe, but Norton twins were in existence long before the Commando was even a twinkle in Dr Stefan Bauer’s eye. In fact, the venerable Norton twin engine was first delivered by Bert Hopwood in 1948 and, when later married to the world’s first modern motorcycle frame, the Featherbed, instantly became what true believers know to be one of the most iconic motorcycles of all time.

Thus it comes as no surprise that in his new book on the pre-Commando twins, (known to the cognoscenti as ‘Dominators’), the prolific motorcycle writer, Mick Walker, has the good sense to conclude that; ‘…the Featherbed-framed machines were the best Norton twins. Somehow the Commando was never quite the real thing. It (and the Atlas) felt overstretched, in a manner from which the 500, 600 and 650 Dominators did not suffer. And so this trio get my vote as the real deal in Norton’s twin-cylinder story.’

It’s not every day that a new book comes out about Norton, let alone a stylishly written and produced new book about the pre-Commando twins. Mick Walker’s book is just about the most complete compendium of Dominator lore in existence, challenged only by the coverage in Steve Wilson’s beautifully written ‘Norton Motorcycles’ and Roy Bacon’s technical writing exercise ‘Norton Twins’. (Mick Woollett’s otherwise exhaustive ‘Norton, The Complete Illustrated History’, contains surprisingly little coverage of the Dominator range). While there is not much completely new information in Mr. Walker’s book, no one else has told so much of the Dominator story before in one volume.

Mr Walker describes the origins of the twin cylinder engine in Norton’s post war scramble to match the existing Triumph twins and to develop product for export. He tells the story of the development of the Featherbed frame, designed independently by the McCandless brothers, and then adopted by Norton as its own, even though, to the very end, Norton lacked the modern welding capacity necessary for its manufacture. (Although never acknowledged by Norton, all Featherbed frames were actually made by the Reynolds company.) 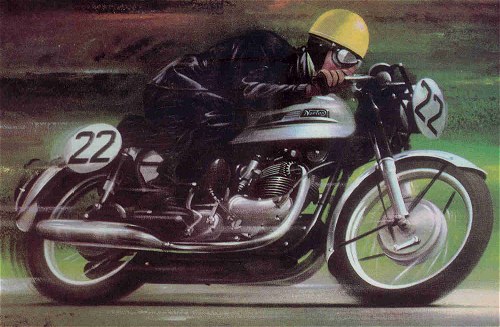 Most of us know the revolution wrought in racing in 1950 when the existing Manx overhead cam single engine was housed in the Featherbed frame, but many do not know the racing successes achieved when the twin cylinder engine got the same treatment. Before its development was abandoned, in 1961 Tom Phillis, riding the 500cc Domiracer, on its first and only outing on the Isle of Man, lapped the course at 100.36 mph and finished third behind Mike Hailwood and Bob McIntyre riding Manx Norton singles. A 650SS (Sports Special) came in first in the Thruxton 500 mile production endurance race in 1962, 1963 and 1964, and probably would have continued to do so except that the rules prohibited racing the same bike more than three times! And in the US, Dominators took a third and fourth place at Daytona in 1953 and were used in an unsuccessful factory-backed attempt in 1964. (Of course, while often obscured by Harley-induced amnesia, no-one can deny the magnificent feat Norton singles achieved by winning at Daytona in 1949, 1950, 1951 and 1952).

Of particular interest to American readers is Mr. Walker’s description of Norton’s sales in the US. Especially after the New Jersey based Berliner Corp took over distribution, feedback from the US encouraged capacity increases that led to the 650cc models (first imported to the US as the Manxman), and the 750cc Atlas (named after the most powerful rocket in the US space program). Berliner’s knowledge of the US market also led to the development of specialised, and now highly collectible, desert sled models, like the Ranger and P11, created by squeezing the Dominator engine into a Matchless/AJS frame. 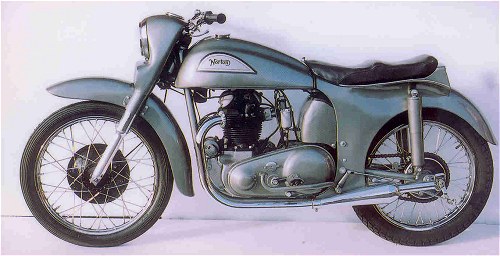 To his credit, Mr Walker eschews a simple chronological list of models and, instead, organises his chapters around separate topics such as the development of the Featherbed frame and the American market. While this non-chronological organisation results in some chapter to chapter overlap — for example the 650SS gets included in chapters on the 650cc models, production racing and the American market — it allows scope for extensive coverage of topics like boardroom politics and the career of the racer and specials builder, Paul Dunstall.

Mr Walker’s chapter on politics provides an unmatched description of the combination of avarice and incompetence that led to Norton’s takeover, and eventual looting, by AMC (Matchless/AJS) followed by AMC’s own bankruptcy and take over by Dennis Poore’s Manganese Bronze Holdings. It was Dennis Poore who folded Norton into the newly created Norton Villiers company, which developed the Commando and eventually absorbed BSA and Triumph. The story is one of missed opportunities as, for example, when Bert Hopwood led Norton to profitability and planned a move to a modern factory, only to watch Norton’s profits get siphoned off by its parent company, AMC. [Disagree with this viewpoint? Feel free to state your own case!]

Mr Walker’s chapter on the legendary Paul Dunstall provides perhaps the most extensive description of his career ever published in one place. Dunstall started out, as a nineteen year old, tuning and racing his own 99 (600cc) Dominator. He purchased the factory’s 500cc Domiracer when Norton abandoned its development and then went on to manufacture complete bikes under his own name based on the 650SS, Atlas and, later, the Commando. His goodies, including the famous, and now much copied, Dunstall Decibel silencer, remain highly prized to this day.

What is puzzling is the inclusion of a separate chapter on the lightweight Jubilee, Navigator and Electra twins. Using a completely different engine design, the lightweights are not Dominators. Ultimately one suspects that they are included only because Mr Walker did not think them worthy of their own volume — and could not think of anywhere else to put them.

Because of the sheer volume of Commandos sold in the US after the reorganised Norton company, under its new Chairman, Dennis Poore, terminated its relationship with Berliner and set up its own distribution system, few Americans are personally familiar with the primary attribute of the Featherbed framed pre-Commando bikes — razor sharp handling unmatched by any other bike of the era — and, in the eyes of many, superior to that of the Commando.

Instead, there is a bias against the Dominators, in large part because of the prevalence of some hoary legends about excessive vibration from the Atlas 750cc twins. (Don’t all real motorcycles vibrate?) For anyone who wants to discover why the Commando was only part of the Norton legend, Mr Walker’s new book is an excellent place to begin.