Our Cornish correspondent, NVNL, turns his attention to a minor mechanical matter on his Triumph Bonneville. Well, it started out as being ‘minor’. Honest…

The best lack all convictions, while the worst Are full of passionate intensity.’

Sometimes even on the brightest and best of Cornish Sunday May mornings it does feel like things are falling apart and that the centre will not hold for much longer. It’s nine o’clockish and Rufus the T140 and I are messing about on the Goss Moor to the South East of Newquay. Usual stuff, gorse, heather, sedge, babbling brooks, buzzards. The roads aren’t absolutely devoid of traffic but it’s very quiet. The 750 engine burbles happily enough but the clutch is slipping and has been getting progressively worse since last August. The symptoms are nowhere close to terminal but something must be done, and I’m the person who must do something.

The something in question is to inspect and assess the clutch mechanism and take any necessary remedial action. This ‘something’ is well within my own performance range, I’ve done this job before on all sorts of bikes, including this very one, and yet I find myself lacking confidence and plagued with neurotic doubts. My favourite multi plate clutch fettle was on a Yamaha because to correctly locate the clutch retaining screws I had only to screw them home all possible, no decisions to make, no possibility of getting it wrong. A sharp contrast was the clutch on my Tiger 90 – by some long forgotten schoolboyish error I managed to foul up on adjusting the springs to an even pressure and warped the pressure plate. Well, it’s the sort of mistake you only make once. I hope. 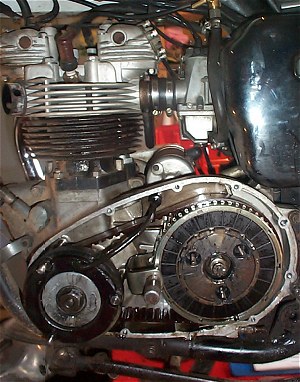 Sins Of The Previous Owner

In 1992 Rufus the T140ES was the new bike in my extensive string of thoroughbreds, partbreds, has-beens and neverwozzers, and despite all assurances to the long suffering Mrs NVNL at the time of purchase that the bike was basically quite sound, actually one or two things did need sorting out. Another way of expressing this is that at the test ride the bike managed to function quite convincingly by some strenuous act of willpower of its own and knew a sucker when it felt his boot on the kickstart pedal; subsequent use after money had changed hands revealed a discouraging litany of faults and bodges.

For worn-out pre unit Beezer bits in a T140

This was my first motorcycle with an electric starter. At the time of purchase the starter was in a cardboard box rather than on the bike and part of me was looking forward to fettling and fitting it. On applying the starter to the engine I discovered that the sprag clutch was unserviceable and in 1992 sprag clutches for T140s were on the unobtainium list. So back in the box it went to await developments.

To paraphrase Douglas Adams in ‘The Hitchhiker’s Guide to the Galaxy’ new civilisations did arise and more sprag clutches were produced, I got one from Reg Allen’s long ago and it’s worked well for some years. I have a sickening feeling (actually LAB’s remote diagnosis with which I readily concur) that I shall be buying and fitting another to my Commando very soon.

When making major purchases in this life I’m often either completely cavalier and just buy what’s in front of me, or absolutely nit-pickingly paranoid and walk away from all manner of perfectly decent kit, especially houses – I am useless at buying houses. With motorbikes I buy them if I like them. 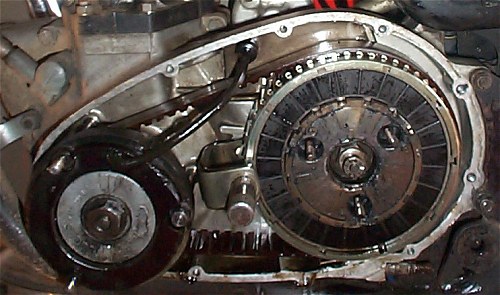 So, having appeased Mrs NVNL with the ‘it’s in really decent condition for its age, Darling’ ploy, the Bonnie needed a new primary drive belt within the first six months and off came the chain-case cover. Inside all looked well and I rang Tony Hayward (01244 830776) for a new belt. It turned out the belt drive on the bike when I bought it was a mismatched collection of Trumpet Beezer and Undefineable parts. One thing led to another and in the end I fitted two new pulleys and belt, a new Triumph clutch centre and rubbers, a cast pressure-plate from SRM, a roller bearing pressure-plate lifter and six Surflex bonded clutch plates.

So on the sunny Sunday morning in 2005 I wasn’t too worried that the clutch slip was getting worse because I had already ordered fourteen new clutch plates (seven plain for seven bonded) and three 650 type clutch springs from the long suffering TMS of Nottingham (0115 959 3447) and I knew just what to do, had all the tools, gasketry, unguents and potions in stock and was just looking forward to banishing the mordancy of my Triumph’s clutch.

Now might be a good moment to mention the best laid plans of mice, men and so on… but you’ll have to wait a little while to find out exactly What Happened Next! 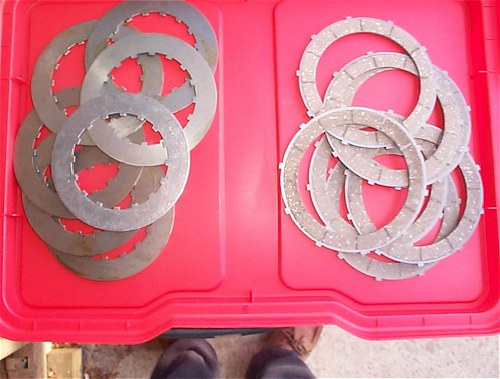