In the August06 issue of the magazine, Ozboy introduced us to a little baby Beemer, an ohv 250cc single. Now David Bullivant expounds on the subject and makes some suggestions about how to get the best from a little BeeEmm…

One of the main reasons for the R25’s lack of sales success in Britain when it was new was the bike’s relatively high price. Ozboy explained that it cost £228 in the UK, at a time when the BSA C11G cost just £150. This can be traced straight back to the government of the day which, for better or worse, insisted that foreign luxury goods coming into the UK should be subject to an horrendous punitive import tax.

So, yes, in the UK the R25/3 – and in fact any BMW motorcycle, or any NSU for that matter – was subject to the most dreadful tax, plus purchase tax. This tax was protectionist, so that those then living in the UK and in the market for a new motorcycle would not be corrupted by quality engineering, but would be forced into buying a BSA C11G instead! The price of the 250cc BMWs in Europe – the land mass the other side of the English Channel – was totally different, which is why they were so popular and the factory could sell every one they built.

Now to the machine itself. The idea of the long inlet tract, starting at the front of the bike just beneath the leading edge, right hand side, of the fuel tank, was to add bhp. The air filter (which British 250 was ever supplied with an air filter, eh? The manufacturers wanted us to wear out our bores so we would buy lots of spare parts and keep the factories in business…) and choke let air into that long, curved pipe, and that long induction system actually boosted performance. 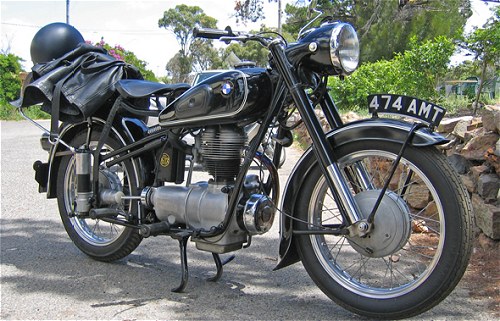 BMW had been making aero engines throughout the war (a lot of them based on Pratt and Whitney double-wasp radials, built under licence, and BMW did what Opel did during the war; paid their licence fees regularly to the American companies entitled to the licence fee per unit), so BMW knew about extracting power by tuning induction tracts. There was even an experimental single cylinder-engined bike made by BMW using the cylinder and cylinder head from a Pratt and Whitney double-wasp radial. That bike had churned out even more power! 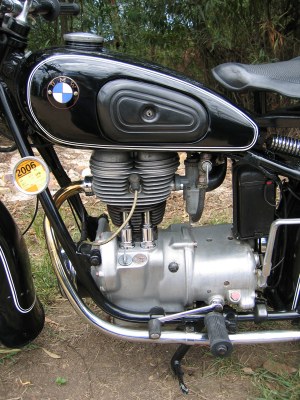 As another (useless) fact: the R25 engine is exactly half an R50 boxer twin; same cylinder and head, valve gear and so on.

As Ozboy observed, the R25/3 does have a very low first gear. I wondered if the example featured in the magazine (RC27) had a sidecar back end and lower gearing in the rear drive unit. Most German motorcycles of that time had the first three gears fairly close together, with fourth set a long away as a sort of overdrive. Herr Hitler had his country liberally equipped with autobahns, and there were also mountains and towns to deal with!

The ideal way to ride a 250 BeeEmm single is to rev the engine (square dimensions means a shorter stroke than on something like the iron-headed BSA C11G), so once on the move, snick silently up into second and rev it … then snick up into third and rev it – these BMW 250 engines will easily run to fifty or sixty mph in third – then snick it into top and hold the speed and let the revs drop.

They accelerate very rapidly indeed, if full use is made of the right-hand grip (and, of course, if you are confident that the Proud Owner is happy for his cherished machine to be treated in this way). And there’s another problem for riders who are more used to classic British bikes rather than their German counterparts; the BMW throttle is geared, as Ozboy noted, so to get it to rev one has to wind the throttle open once more. 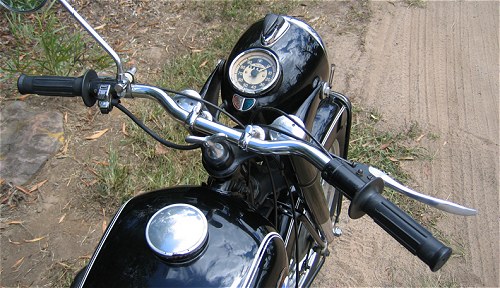 It needs two bites of the cherry to get the very heavy flywheel spinning. Then these bikes simply fly!

So thank you, Ozboy, for allowing us to read about a delightful non-British motorcycle. What a shame about that dreadful import tax! Had the NSU Max come out of our shops at the same price as the BSA C11G, British manufacturers may have been moved into producing something more modern… and who knows, may have been still in business today!

Photos by Trevor ‘Ozboy’ Brooks (And very nice they are too. RM) 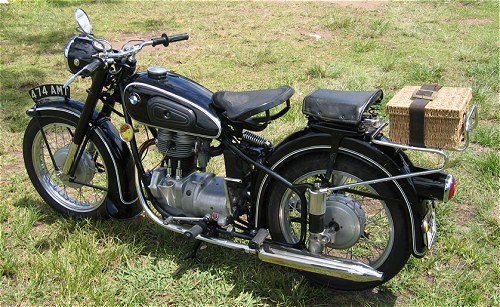