In part I, Martin Gelder wrote off a BMW R60, then bought an R100S and rode round for a bit before writing that off as well. The story of Common Problems continues…

Time passed. The crashed BMW languished under a green canvas cover in the front garden while a Mk1 Le Mans tried to take its place. Once the insurance company had agreed to sell me the written off remains of the BMW (possession being nine-tenths of the law) I started the rebuild. The frame was straightened, new fork stanchions fitted, two new headlamp lenses purchased (the first one hit the floor while I was trying to fit the spring clips to hold it on the rim) and various second hand bits acquired; the R100S was ready to roll a mere two years after the accident.

It had been so long since I had last ridden it that I had almost forgotten about the suspect clutch. The day before the setting off on the bike’s first long run since the rebuild the clutch failed completely. To change the clutch on a BMW (Common Problem No.7 – R100s eat a clutch every 20,000 miles or so) you need to disconnect the shaft drive, remove the swinging arm, remove the air cleaner, remove the gearbox and then split the flywheel. By the time I had worked down to the clutch-plate itself, darkness had fallen. The new plate went in the next morning, and after carefully refitting and double checking everything that had been removed, I set off for Carlisle.

It rained for the first hundred and fifty miles or so, and the bike went on to reserve unusually early. Back on the motorway after refuelling and the rain eased off, the roads dried out and I was happy to be back on the BMW and heading North. Ah, the open road, the blue skies, the sunshine, the wet foot, the smell of petrol…. Looking down I could see a steady dribble of four star leaking out of the left float-bowl and soaking into my Doc Marten. Well, at least I knew why the fuel consumption had gone up. (Common Problem No.8 – the spring-clip fastened float bowls have to be very carefully seated to prevent them from leaking – throw in a slightly sticky float valve, and the result is a boot full of petrol).

With the next service station about 10 miles away I decided to press on rather than stop on the hard shoulder. I don’t know whether any of you have ever sat with your foot soaking in a petrol bath, but believe me when I tell you that it’s not long before it starts to sting. Shortly after that, it starts to feel as though your foot is on fire; when you are only too aware that the said foot is already soaked in petrol this is quite a distracting sensation.

I flew up the services slip road without slowing, cut straight across the car park and headed straight to the free air and water area of the filling station. Leaping off the bike I started scrabbling at the petrol soaked laces before spotting a bucket of water next to the tap. The relief as I plunged my still booted foot into the cool water was pure bliss. I lay back for a couple of minutes with my foot soaking in the bucket until I realised that a small crowd was starting to gather. After removing the now sodden boot and sock and rinsing off my foot (which cleared the crowd pretty quickly) I cleaned out the carb and was able to carry on my way.

Despite this catalogue of woe, my trusty(ish) steed was actually getting more trustworthy, so I had no hesitation in choosing the BMW for a trip down to the south of France with a bunch of friends. I’d never ridden with them before and was concerned that the ten year old BM (now fitted with K100LT touring handlebars) wouldn’t be able to keep up with its GPZ1100 and Moto Guzzi Le Mans travelling companions. This uncertainty is probably why I neglected to mention to my friends that the rear brake calliper had seized up (C.P. No. 9) shortly before we left. I hardly ever use the back brake, and what they didn’t know wouldn’t hurt them. Unless they stopped very suddenly right in front of me, of course.

The bike behaved itself impeccably for the rest of the trip, and the following spring with the mileage approaching 40,000 I replaced the clutch at the first signs of slippage before setting off to visit friends in Germany. Another great holiday, sun soaked explorations of snaking valley roads, the bike purring smoothly away, obviously happy to be on its home turf.

As I filled the tank the day before leaving for home I marvelled at the Bavarian summer temperature – up in the high twenties at least. The next morning was a total contrast. The further north I rode, the colder and grimmer conditions got until the bike went on to reserve some two hundred and twenty miles into the journey. Stopping at the next petrol station, with the sleet lashing down around me, I discovered that the filler cap had decided I should stay in Germany, and was defiantly resisting my attempts to unscrew it from the tank (C.P. No.6 – again). The attendant watched me struggle for a few moments, then waved my hands away and started rattling off high speed German at me. Once we’d worked out that we didn’t have a common language between us, he started to sketch an amazingly detailed cross sectional view of the filler cap and petrol tank on a scrap of paper. Waving this in my face he kept saying the same phrase over and over again, until another customer came over. After a hurried conference with the attendant, the customer turned to me and said in faultless English “He says to tell you that it is stuck.”

Oh thank you very much. I then asked our translator whether he could enquire about the possibility of me borrowing a funnel – the conical type, rather than the nautical type (how we laughed at that bit of confusion) so that I could remove the tank, turn it upside down, remove one of the petrol taps, and fill the tank through the resulting three-quarter inch hole. The attendant wandered off and I set about removing luggage so that I could get at the tank mounting nuts (conveniently, the designer had specified wing nuts; he was obviously expecting just such a situation). Imagine my confusion when the attendant returned not with a funnel (conical or otherwise), but with a crowbar. Confusion turned to horror as he jammed the bar between the filler cap and its sealing ring, and started to prise slowly downwards. Just as I was about to start beating him around the head with a quickly detachable pannier, the filler cap clicked and he was able to unscrew it. Obviously all in a days work for a German petrol station attendant. 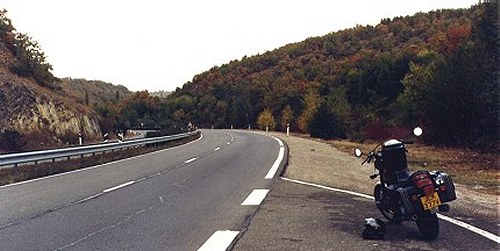 Reading this, you might have the impression that the BMW was an unreliable bike but it never left me stranded, and was always enjoyable to ride.

The fact that I kept it for over ten years, despite having during that period a Guzzi Le Mans, Kawasaki Z750 and Kawasaki ZX10 at my disposal, speaks volumes.

With the touring bars it was an ideal London commuter, with standard bars and fairing it made an excellent tourer, and with a fresh clutch it even held its head high in the Ultimate Streetbike drag racing events of the mid eighties (for the record; quicker than the Guzzi, but not as quick as the Z750).

It was only after I was offered nearly as much as I originally paid for it in part exchange against an R1100GS that I finally said goodbye to my R100S. 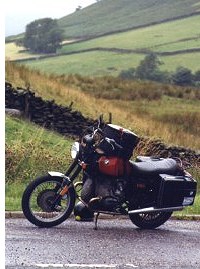 One memory sticks in my mind which crystallises the understated appeal of that bike, and BMWs in general.

I had been staying with friends in Germany again, this time in a tiny village near the Czechoslovakian border. The plan had been to take two days over the journey home, steering clear of the autobahn and making good use of the quiet well surfaced roads abundant in that part of Europe.

I made an early start, and with little traffic and perfect weather I was storming through the mountains near the Nurburgring by mid afternoon. Rather than stop so early I decided to carry on and cross the border into Belgium.

Coming the other way a week earlier I had been picked out for an allegedly random customs check by a German customs official. He asked if I was carrying any items from a list of various classifications. I had to own up to three of his categories; food products (Marmite), alcohol (Theakstons Old Peculiar), and pharmaceuticals (three months supply of the contraceptive pill). My efforts to explain what Marmite was, why I was taking Beer *into* Germany, and why I needed to carry female contraceptives since I was travelling alone left the official so confused that I was waved through… but I digress.

When I’ve ridden a long distance, I find it increasingly hard to stop. Every hotel I pass has some flaw that prevents me from pulling up. Too close to the road, too quiet, too old, too new, too smart, too scruffy… There’s something about being on the bike that makes me want to keep moving.

So it was that I finally rode into the ferry terminal car park at Bolougne after twelve hours and seven hundred and fifty hard ridden miles. As I climbed off the bike and stretched my shoulders and arms three Goldwings pulled in behind me. Seeing me inspect the small blister on my left hand (caused by the mirror stalk rubbing on my knuckle) they boasted that they had travelled almost three hundred miles in total comfort that day, and then asked how far I had come… 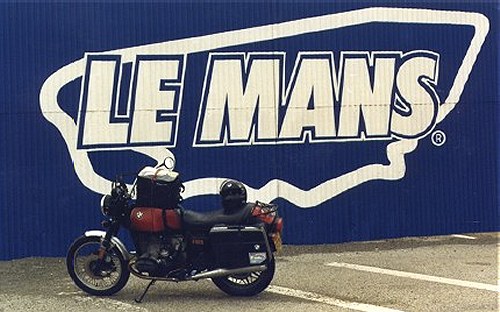