Common fault No.37: Martin Gelder never throws anything away, ever. From the dusty shelves of obscurity comes this tale of a written off and rebuilt Boxer, and a list of funky foibles…

BMW. Three letters that impress estate agents and middle-managers, but will have every shoulder-chipped 250 riding courier reciting a list of ‘common-faults’ that reduce the Meisterschaft to a sub-CZ dog of a bike.

I owned BMWs on and off for twenty years. During that time I aged from being the kind of youth you’d least expect to own an upright and sensible German plodder into the precise demographic selected by the marketeers for the launch of the Boxer’s latest reincarnation.

I could tell you the story of my 1977 R60/7 – the perfect transport for a twenty year old spending two years with a driving license only one endorsement away from oblivion – and how it was very suddenly and very terminally converted into a v-twin. Or I could rant on about the sheer usability of my ’94 R1100GS, and its Achilles gearbox. 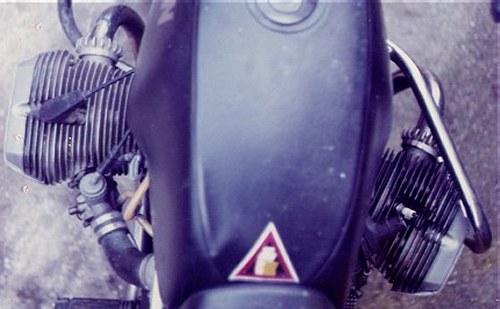 But I’ll save those two for another time. Instead, here is the tale of a 1979 R100S which despite exhibiting every one of those common-faults – as well as a few uncommon ones – managed to transport me for 60,000 enjoyable miles.

The late seventies and early eighties were strange times at BMW. The twin cylinder bike range was being re-vamped, a new range of four-cylinder bikes was about to be launched, and production was being moved from one side of Germany to the other. Despite the modernisation of the twins (lighter flywheels, better brakes, different pin-stripes) it was widely perceived that the new fours would be the final nail in their coffin. So it should come as no surprise that quality control was a bit ‘variable’ in those years.

The launch of the K100 series had another effect; it deflated the prices of second hand BMW twins almost overnight. How could I resist a five year old 1000cc BMW with only five thousand miles on the clock, for a knock-down bargain price of fourteen hundred quid?

It took precisely one cold night for the first problem to emerge. The engine would barely turn over, let alone fire up. Left in the dealer’s warm and snug workshop, the battery would hold its charge. On a frosty Clapham street it didn’t stand a chance; a replacement battery was finally negotiated and all was well. Common problem number one: BMW starter motors need a good healthy jolt when the oil is cold and thick, and the standard battery is not always up to the task – especially if it’s more than a couple of years old. The fact that the entire bike is assembled around the battery just adds to the annoyance (top tip – take the battery out by removing the air filter housing first).

Did I say all was well? The next problem was the coils and HT leads causing a misfire once the bike was up to temperature. Swapping various components round would have diagnosed this problem much more quickly if the number two coil hadn’t started to break down shortly after the number one coil. Common problem number two: Two six-volt coils are fine when both are working – once one fails, the other will surely follow. The world’s largest, most expensive one-piece moulded spark-plug caps don’t help much, either (top tip – fit NGK plugcaps and later model coils).

An uneventful few months passed. Spring blossomed forth and apart from a leaky petrol tap (common problem number three – once again, later versions of the same part are better) the BM and I got down to some serious riding including an eight hundred mile two-day trip from Le Mans to Nuremburg in constant torrential rain; the bike never missed a beat. It was obviously saving up for a special occasion. 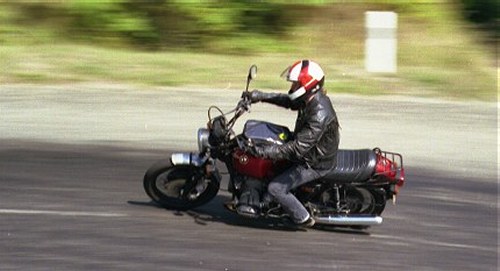 TT week, perhaps? I arrived in Douglas at around five a.m. on Mad Sunday morning. My hotel was not due to open until around seven, so what else could I do but set off for a gentle early morning lap of the legendary mountain course. Despite still being fully loaded (panniers, tank-bag, small mountain of essentials on the back) by the time I left Ramsey and hit the Mountain any thoughts of a ‘gentle lap’ had evaporated. I was on a mission, especially when I caught site of a similarly laden R100RS ahead. Coming out of the Creg I thought I had him until I missed the change between third and fourth gear. A quick second flick of the lever should have engaged the missed gear. It didn’t, and stamping down didn’t drop me into third. Or second, or first. Oh dear. At least it had happened somewhere where I could coast downhill all the way to my hotel…

The next four days were spent waiting for Castletown BMW to replace the offending gearbox input shaft (common problem number four, apparently…) while I tried every alternate form of transport on the island in an effort to see the racing from somewhere that wasn’t Quarter bridge. Horse trams, electric trams, steam trains, coach trips….

To add insult to injury, common problem number five reared its unwelcome head on the ferry home. Waiting in the fume filled bowel of Mona’s Queen, I smugly refrained from starting my bike until the sidecar outfit in front of me moved away. In retrospect this was a mistake, as it was at this point that the starter motor chose to clog its contacts. Anyone who has ever contemplated bump starting a luggage laden bike on the uphill bit of a ferry ramp can imagine my delight… (top tip – if the engine still turns over slowly with a freshly charged battery, clean the starter motor). 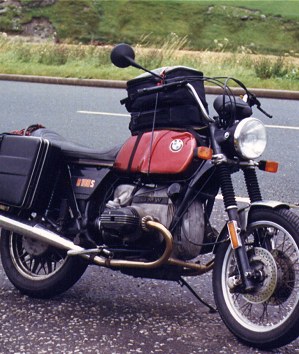 Back in London (Liverpool to Clapham on one tank of four star – thank goodness) and with a squeaky clean starter motor, the miles started to slip by again. Even the jammed filler cap (common prob. no. 6) was a mere inconvenience, being fixed by a BMW mechanic drilling various holes in the offending item and rotating it anti-clockwise while inserting bits of welding rod – “they all do this, sir”. I changed job, moved house, rode through the winter and into the following spring and was about to change job again (ah, the joys of the computer industry in the eighties..) when I began to suspect that the clutch was starting to slip under hard acceleration.

Heading into the office one crisp April morning with a rugby playing house-mate perched on the pillion presented a perfect opportunity to test the clutch. Rolling on the throttle, I was pleased to observe that no slip was evident up to around seventy in third. I was less than pleased to observe a Ford Granada doing a U-turn (from the inside lane of a dual carriageway?) right in front of us. The clutch might have been up to scratch but the fairing, forks and front wheel certainly weren’t. Neither were my friend’s ankle or Norwegian deer-hide jacket. Sorry Nick…

In part 2, Young Mart rebuilds the remains and sets off in search of more common problems, passing through Carlisle, stopping at the German border, and ending up with a blister on his finger… 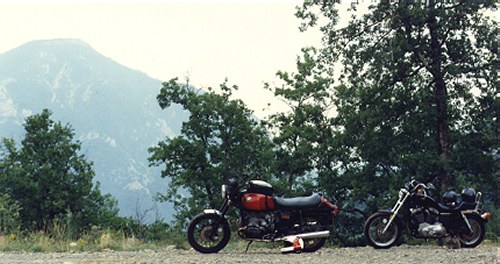