A restoration project is a funny thing: it can offer immense personal satisfaction, and immense frustration and self-doubt, sometimes simultaneously. PaulG80 experienced all three while rebuilding Beatrice…

This story begins in 1997 when I bought a ratty BMW boxer from a work chum. It was a R60/5 1973 model. I originally bought it as a winter hack as it had a single seat, police-style, and the old-fashioned slim fibreglass panniers, and fantastic tank art (more about that later). I rode it around on and off for a year or so and found that I quite enjoyed it. At the time I was also doing a 100-mile round trip on my FireBlade every day.

After using the BMW a few times an ominous knocking developed. That’s when I made the first mistake of taking the engine out. Initially I was going to replace the camchain and tensioner. ‘Quite straightforward’ you may all say, and indeed it was.

So I thought I’d find out why it was puffing smoke on the over-run. Cue removal of cylinder heads.

‘Oh dear,’ I said in the quiet voice of someone who had been waiting for an excuse to start modifying. But work on the bike was left for a while as I planned a wedding and honeymoon and all the various bits that go with it.

In December 2001 I decided to sell the FireBlade (6 years old and 90,000 miles later) and used the money to rebuild the BMW. A plan had been forming in my mind… and it all started with more power. The 600cc engine was torquey but very breathless, so I thought that a big bore kit would be in order. After talking to the very nice people at Motorworks (top blokes all), I ended up having an engine built from secondhand parts to order. The main body of it was from 1984. I had a twin-plug conversion done and a deep sump fitted. To keep the sparks sparking as they should, a rather sexy Boyer Bransden ignition kit was fitted along with Dyna coils. Throughout the engine build, on my instructions, all new seals were fitted together with new piston rings. Whilst waiting for this hugely powerful lump to arrive I consoled myself by removing the bodywork and giving it to a mate of a mate to spray.

My plan at this point was to do an R90S replica, just to upset people. For those of you too young to remember the 1970s, the R90S was a shocking thing — a sports bike made by the people who normally manufactured bikes for old farts. It was the most expensive bike you could buy at £3500 (a Z900 was cheaper by a long shot). I believe it was the first production machine to be fitted with a fairing as standard equipment. But, best of all, it was finished in a smoked orange and silver paint job, all finished by hand at the factory so no two were alike.

OK, history lesson over. I chose the nearest colour to the BMW orange I could get. Funnily enough it’s a Piaggio colour (sorry about the swearword there). I took a picture of the tank art for posterity as it was going to be covered up. Little did I know that due to one thing and another I wouldn’t have all the body panels together again until September 2003. 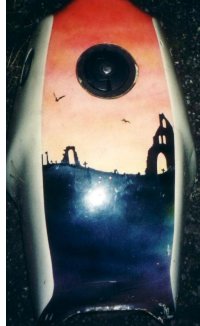 I started by wire-brushing the frame down and spraying it with good old-fashioned smooth Hammerite. Then there was a pause in proceedings until the engine arrived. Now I don’t know how many of you have felt the weight of a BMW boxer engine but, take it from me, they weigh a goodly amount! I was faced with inserting the engine into the chassis on my own. After much head-scratching I decided to remove the sub-frame, take it off the centrestand and break its back, so to speak. I slid the engine from the pallet to as close as I could to the frame. I then lifted it over — and started singing soprano! I slid the engine approximately into place and put the stand back on. This is how I found out that putting a BMW engine in really is a two man job! Once recovered, I re-attached the sub-frame and various bits of ancillaries using stainless bolts where ever possible.

I had ordered a pattern S-style fairing and found I couldn’t attach it as the fork legs were the wrong type (from the R45 front end), so I made another phone call and soon I was the proud possessor of a pair of ST forks, a set of progressive fork springs and some heavy duty fork oil. After swapping these over one afternoon I retired indoors to congratulate myself on a job well done — but Beatrice had a surprise up her sleeve. When I returned to the garage a couple of days later there was a pool of oil under one fork and the front tyre. Bugger.

After another phone call I got new fork seals delivered. They were very easy to do and I kicked myself for the earlier false economy. While I was doing this I upgraded the braking to a twin Brembo system using a bigger master cylinder and lovely stainless hoses.

Worked stopped for a while as we moved house — and I was still without bodywork. In August 2002 I got my panels returned and could set about the build-up in earnest. I fitted the tank and put a litre of petrol in… then what should I see but a slow drip from the bottom of the tank! Bugger again. I found a specialist repairer in the BMW club mag and when I spoke to him he said; ‘Oh they all do that after a while.’ So if you own an air-cooled Boxer, particularly if you have a sidestand, then check the left side under the tank, about an inch forwards from the tap. Apparently that’s where the water collects when the bike is stood on the sidestand, and after a while it turns into a leak.

So after carefully packing the freshly-painted tank and sending it off I got phone call asking what condition the tank was in.

‘Just been sprayed’ said I. Not any more! Apparently the lovely courier company used it as a football despite stickers saying ‘fragile’ and ‘do not drop’. 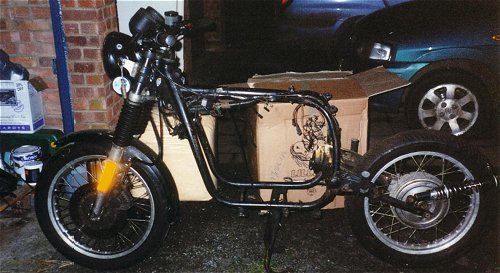 I got paid out for the damaged tank in December 2002. I set about the rebuild again in February, doing bits and pieces. I finally got the BMW with its new engine running again using a petrol can balanced on the subframe, with pipes running to carbs (what fire risk?). It was so good to hear it run.

In April I took possession of Matilda (see my other article) and in May/June time I ordered a secondhand petrol tank from Motorworks. My instructions were that I didn’t care what it looked like just so long as it didn’t leak. When the tank was fitted I had to use the single seat, as my dual seat was away for colour-matching the tank. Thus equipped she passed the MoT second time around, initially failing on stupid things I should have checked.

But, even with a certificate, she was running real bad. Enter my Dad who suggested checking the tappets, which we did, and lo and behold the inlets were slack and the exhausts had no clearance at all. After these were put right and the carbs balanced she ran beautifully.

I took my first long run to meet some guys from the Pre-78 BMW smartgroup at Cosford Air Museum. It was all going swimmingly… until I heard a loud knocking from the drive shaft. I pulled over (difficult on the M6!), and had a look. All the drive shaft bolts had fallen out – luckily, into the gaiter that surrounds them. So after a quick roadside repair I was back on the road and the rest of the journey passed without incident.

I started to alternate between Matilda and Beatrice for my ride to work every day using each one every other day. Let me tell you that the brain gets going when one day it’s left foot one-down three-up (Beatrice) and then the next it’s right foot one-up three-down (Matilda)!

I took Beatrice to the World Superbike round at Brands Hatch in August and was following my mates home when, on the M11 in the outside lane (at 70mph your honour): BBBWWWWWWOOOOOOR. A quick shufti on the hard shoulder revealed no sparks. Bugger yet again! So we had a nice ride home in a van. When I looked, the wires between the trigger unit and ECU had been crushed between the casing and alternator, causing a dead short. A brief session with the soldering iron and a new ECU later we had life once more. I re-routed the wires by drilling a hole in the casing and fitting a grommet to stop it happening again.

Then in September this year my second petrol tank finally returned, painted at last (yippeeee) and Beatrice looked pretty again. We went to Cadwell Park to watch some classic racing and the journey passed without incident. 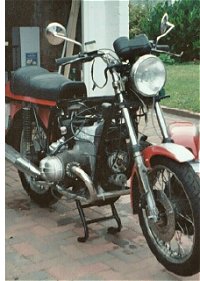 Riding impressions are quite good at the moment. She has to be ridden like a classic; into top as soon as possible. But I think that a 5-speed gearbox is next on the horizon to make cruising at motorway speeds a bit more bearable. It is very easy to see why BMWs were so expensive as she feels very much a ‘Gentleman’s Express’.

All in all the build has been frustrating a lot of the time, but rewarding too. I now have a very individual bike that on first glance looks standard. I need a new project now but can’t bring myself to sell her. I’ll hopefully be at some shows this year — so if you see me, just don’t ask me how long my paintwork took…