When is a Harley-Davidson not really a Harley-Davidson? When it’s an Armstrong, of course! The military motorcycle plot thickens on both sides of the Atlantic: Allan Johnson stirs the soup…

There’s some rather interesting background history to the origins of the Armstrong MT500 and 350, which also explains how H-D got back into the military motorcycle field.

These bikes originated from the Italian SWM Tornado in the early 1980s, in an attempt to make a street-legal model to go with their competition line-up. It was also developed in a military version, but the firm was in financial trouble and, in the collapse, the design went to Armstrong-CCM.

CCM at that time (1982-83) were just taking over manufacture of the Can-Am line of competition motorcycles which had been built from 1973 to 1982 in Canada. This shift in production site was arranged by Jeff Smith (of earlier BSA fame), then with Can-Am. Can-Am had produced the 250cc Bombardier motorcycles used by various NATO forces. Engines in the Bombardiers, Can-Ams, the SWM and the Armstrong MT500 were all Rotax units made in the Bombardier-owned Austrian factory.

By 1984, the production of the Armstrong MT500 manual start model (I think about 2500 of these were eventually made) and some electric start versions for the Jordanian and Canadian military was well under way. The Canadian Army took only 90 of the electric start version, known to them as the Armstrong M50. These were in service until the early 1990s with the result that some bear H-D labels on the side covers instead of Armstrong ones.

In 1987, production of Can-Am motorcycles ceased at Armstrong and the military motorcycle business was sold off to H-D at around the same time. One of the factors in this is not so much that H-D wanted to be in the military motorcycle business, but the fact that they were using the Rotax engine in their dirt-track racing team effort. The idea of using a ‘foreign’ engine, even though very competitive, was no doubt a bit galling to them. H-D did have connections with the US military, having been saved from bankruptcy in the 1980s by the award of a munitions contract.

The MT350E is a development of the M50 and shows, in its use of the large front panniers, one of the current problems which the military face with vehicle design. That is the fact that infra-red technology is so developed now that engine heat becomes a giveaway at night. No doubt the move to a 350 engine is an effort to reduce heat radiation and the side panniers are a further attempt to block radiation. The Canadian Army has gone to Kawasaki KLR 250cc motorcycles for its general use and these are water-cooled and have the usual radiator shrouding to reduce side radiation profile.

One of the other problems with military motorcycles is the fact that they are one of the few military vehicles in most modern armies which do not run on diesel fuel. This has been a supply inconvenience for a long time and has limited the acceptability and role of motorcycles in many armies. This fuel type problem has been studied for many years, (there was a diesel Norton ES2 in the 1950s) but I understand that the Canadian army has been looking at a diesel version of their current bike. I wouldn’t doubt that the British Army and NATO have been doing the same. (Diesel experiments with Enfields abound, too. RH). 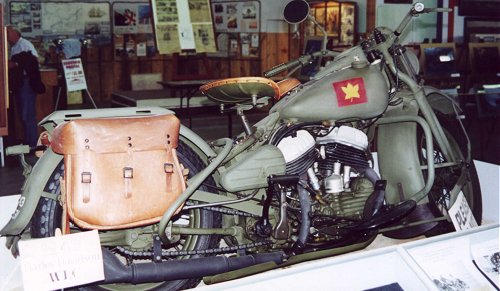 H-D was a large producer of military motorcycles in WW2 with their WLA (American Army), WLC (Canadian Army) and US (South African Army) models being the best known. Not many were used by the British military, except some WLCs which were used by the RAF, but lots of WLCs and WLAs were sold surplus in Britain after the war, as were the 500 and 750cc Indians. The WLC differed in many respects from the American version, most notably in having an auxiliary hand clutch in addition to the rocking pedal foot clutch.

While the old WLC Harley would certainly let your feet touch the ground, I think the Harley-Davidson MT350E is probably the more practical choice — in this day and age, anyway.

Got more to say about military motorcycles? Join in…