Sarah bought her Dad a One Hundred Pound Wonder, and we tried to figure out exactly what kind of classic bike it might be…

It started as a message on the message board and an email to Frank W. Sarah said: ‘We bought an old Ariel for £100 for a surprise present for our Dad’s retirement…’

Unless you’re very clever (and named Mart), the RealClassic message board doesn’t carry images, so Sarah sent some to Frank. And here they are; the One Hundred Pound Ariel in all its faded glory. 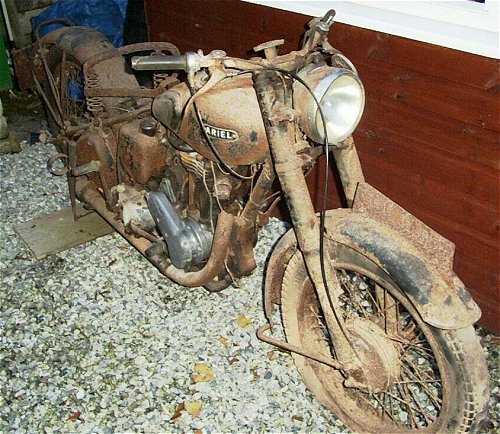 Sarah said; ‘We are still trying to identify exactly what type of Ariel the bike is (only got it last week) but we seem to think it is from around 1946…’ 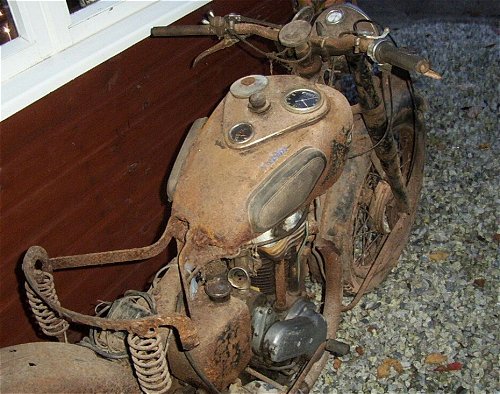 So Frank put on his Man Who Knows (nothing) About Ariels hat, and went a-searching. And it looks indeed that this is a 1946 or later machine, because the telescopic front fork didn’t appear until that year. However, the speedo looks like a Chronometric, and they became standard around 1948, so maybe the bike dates from that time. Determining exactly which model the bike is would depend upon having the engine and/or frame numbers, but it’s one of four models; either a 350cc model NG or NH, or a 500cc VG or VH. They’re hard to tell apart, and if any real Ariel expert would like to help… Frank@RealClassic.co.uk is conducting the investigation. 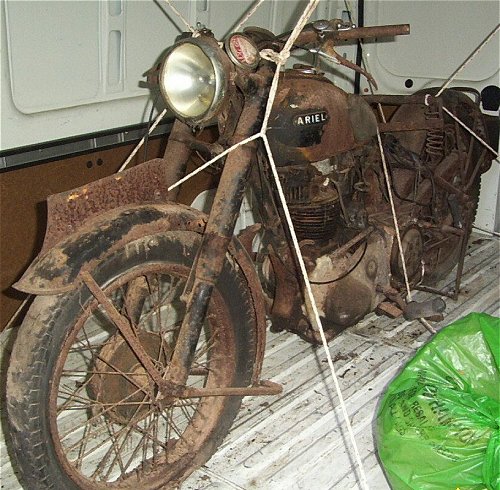 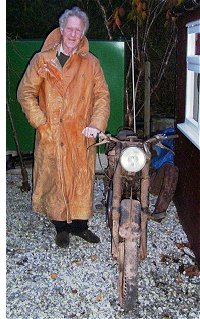 The differences between the two ‘G’ and ‘H’ models include a different frame, but it’s hard to see which frame is fitted here. So, moving swiftly on, we discover that the ‘G’ models were considered to be ‘de-luxe’ while the ‘H’ models were the more sporting Hunters.

Aha! The ‘G’ versions had valanced mudguards, while the Hunters did not. And Sarah’s dad’s bike has unvalanced guards.

QED. The bike is either a 350 or 500cc Hunter dating from somewhere between 1946 to 1950. More interesting is that bikes like this, off the road for years and just about entirely original, are still about, and available to those lucky enough to discover them for sensible prices.

Finally, Sarah remarked that; ‘The coat Dad is wearing was thrown in for the money and is currently being restored to its true glory!’

When is scrap scrap?