The RealClassic 10th anniversary celebrations start with a ticket giveaway for the South of England Show in March. And we’ve been promised a birthday cake!…

2012 is a busy old year, what with the Diamond Jubilee, Dickens’ anniversary, the Olympics, the sinking of the Titanic, and even the end of the world (if you believe one word that the Mayans say). But never mind such insignificant piffling little trifles; here at RC we’re celebrating two magazine milestones of our own this year.

The RealClassic.co.uk website was set up almost a decade ago and will pass its tenth birthday before 2013 rolls around. Meanwhile, the monthly magazine itself reaches issue 100 in August. So we’re ten and one hundred simultaneously, which probably explains a lot about how we view the world…

So our small celebrations get under way at the RealClassic Motorcycle Show and Bikejumble on Sunday March 11th 2012 at the South of England Showground near Ardingly in Sussex. The first part of the fun is FREE ENTRY to the Show for six lucky RC readers. That nice Mrs Elk, the Show organiser, is GIVING AWAY three pairs of tickets. Whoop-whoop!

To win a pair of tickets, simply email Mrs Elk (not RCHQ this time) with the email subject RC TICKET GIVEAWAY and tell her your name and address. Entries close on March 2nd 2012 – and here’s the sneakily clever bit: we’re not telling you Mrs Elk’s email address. You have to go to her site and find it for yourself. So go to www.elkpromotions.co.uk, email Mrs Elk accordingly, and she’ll randomly choose three winners to receive a pair of tickets apiece.

Then the freebies keep flowing at the Show itself, when we’ll be handing out ten RC t-shirts to ten current RC subscribers during the day. Just drop by our stand in the main Queen’s Jubilee Hall and show Rowena or Frank your RC Club card. All the member numbers will go into a hat (a RealClassic hat, of course) from which ten winners will be extracted at 2pm. Mrs Elk has also promised a birthday cake (!) with ten birthday candles (!) so if you’re really lucky then you might snaffle a chunk of cake as well (or instead of) a free RC tee. 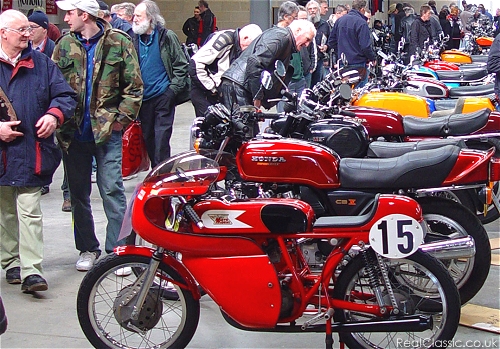 The South of England Show has grown considerably over the years and now sprawls out of the main display hall and into three further agricultural halls with trade stands and autojumble stalls. The concours displays feature a broad range of private entries, including British, European, Japanese and American classics, while the club stands usually reflect the major marque clubs (VMCC, Triumph, BSA, Norton, AJS and Matchless) and more unusual manufacturers and models (Indian, Bantam) as well as local groups (Cinque Ports, South London, Deal and District, Sussex and so on).

This means that the hall fills with a variety of motorcycles from all eras; roadgoing, trials, competition and even wall of death display machines. There’s so many bikes that the biggest problem is getting everyone lined up in neat rows… 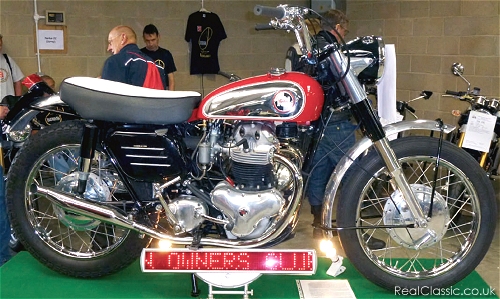 Without doubt, a pair of Norton Nomads were the star of last autumn’s Show; owner Another Curzon unveiled his recently restored 500 and 600 twins which went on to grace the cover of the magazine. Other worthy award winners included a 1936 Francis-Barnett Black Stag F/44 from the FBOC stand; a very unusual model fitted with a four-stroke Blackburne engine. Ray Ashford’s 1964 Ariel Arrow also picked up a prize; he restored it back in 1985 and has been using it ever since on club runs.

The ‘heavyweight’ award went to a 1954 AJS Model 20 which has clocked up 20,000 miles since its rebuild and was featured on the AJS&M Club stand. At the other end of the scale, the Lightweight prize went to Jill Jackson’s BSA Bantam D7 – and in between those two another dozen bikes were given various trophies, in categories ranging from Best Brit to Competition/Special and Best Overseas.

The Show on 11th March 2012 opens at 10am; RealClassic subscribers can claim a discount off the admission price and come in at the £5 OAP rate, so remember to show your RC Club card when you pay.

You’re welcome to grab a small jumble stall yourself if you’d like to clear out your garage; book in advance on 01797 344277. You can also bring any bike you’d like to sell and pay the normal admission price to display it in the ‘bikemart’ area. Clubs and group are welcome to ride-in on the day; might be worth organising this in advance if you’re a big bunch. The venue provides free parking on good hardstanding, decent toilet facilities, plus on-site refreshments and usually an undercover seating area too, so you don’t have to scoff your hotdog on the hop. 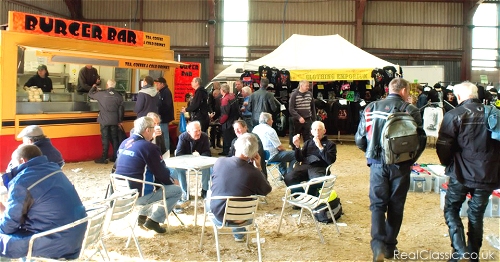 We look forward to seeing plenty of RC readers on the day. For more details, see www.elk-promotions.co.uk – where you’ll also find the email address to send your competition entries too. Good luck!