What’s the best way to stop oil draining into the sump of your old British bike? Phone up Frank Westworth and ask him…

Many sights common in today’s world are a puzzle to me. Prime among them is the endless parade of folk marching about with cell phones nailed to their ears. Cell phones are marvellous devices, not least because they allow a chap to contact the breakdown services from the most imaginative of breakdown locations, but what on earth are all these folk endlessly talking about? And to whom? Whenever I suffer the misfortune of overhearing them, they are burning crucial 21st century microwave technology to discuss the various brands of beans in a supermarket, revealing to someone somewhere that they’re on the train now, or they’re just jabbering. It is a mystery.

I am no great fan of the electric telephone. It rarely rings when I want to be interrupted and no-one has ever called me to offer me a remarkable bargain. Instead when the telephone demands my attention it is usually a robot demanding that I do something unspeakable with payment protection insurance or something equally meaningless. And in any case, when I am at my desk I am usually working, so I don’t welcome interruption so I don’t give out the number. Cell phones are great; mine is always switched to silent ringing (a glorious notion) so folk can call it without fear that I will pick up and be grumpy at them. It works well. I can always call back later. And sometimes, I do…

Unhappily, however, some folk do manage to find the office number and call it. If they’re being friendly, I don’t mind this, I just explain and apologise if I’m struggling with reading, writing and understanding things, and folk accept this with good grace. Usually. Sometimes they do not.

A man called. He couldn’t remember where he’d found the number. That was OK. No deadlines at the time, so little stress. How could I help? I always ask this. Usually I can’t help at all, of course, but politeness is apparently its own reward.

The man was unhappy with his bike. I was sad about this. Why had he called me – someone he doesn’t know – to tell me this? Is a burden shared a burden halved? I do not believe this to be the case. And in any case, talented though I may be, I can’t fix bikes over the phone. What was wrong with it, I wondered?

He had fitted an anti-sumping valve to his bike, he revealed. I nodded sympathetically. This has little effect down the telephone wires, so I added an audible ‘Ahhh…’ to make the point. The valve had failed, starving his engine of oil and causing it to destruct. I nodded with increased sympathy, added an extra free ‘Ahhh…’ He was unmollified. I tried to be kind, understanding. Had he bought it from an ad in the magazine I edit, I wondered?

He had not. He’d bought it from an ad in a club magazine. From a supplier he could not now remember but who might have gone out of business. I was relieved. I don’t think I’ve ever recommended putting any form of obstruction in an engine’s oil feed, and would never do it myself. I said this. He remained unmollified. My sympathy was wearing a little. Maybe there was an interruption in its lubrication? 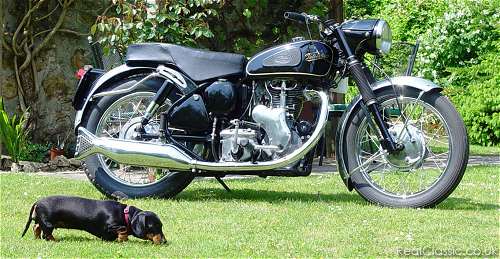 I suggested that if he didn’t know who had supplied the part then he would struggle to get any compensation out of anyone, if indeed that was what he was after. And in any case, why on earth had he fitted a valve of any kind into his engine’s oil feed? That does sound slightly risky, even though lots of folk do it. Wasn’t it a better idea to drain the sump after leaving the thing standing for a few months?

He disagreed. He had spoken about his wrecked engine to an expert engine rebuilder who had told him without actually seeing the engine that the anti-sumping valve was to blame. It had been fitted for about ten years with no problem, he told me. I wondered how the engine rebuilders knew without seeing the wreckage what had caused the wreckage to become wreckage? He revealed that this particular failure is common among users of this kind of anti-sumping valve. Is it? I wondered at this, because I’d not heard it before. And neither had he.

Why, I wondered once more, had he called me to complain about this? I don’t sell anti-sumping valves, I don’t recommend their fitting and I don’t run a bike like his anyway. Apparently I have a duty to inform folk, that’s you, gentle reader, that these unknown parts from that unknown supplier who may or may not have gone out of business will cause your engine to self-destruct at some point.

So. Were you about to fit an anti-sumping valve to your P&J, re-read this sad tale and reconsider. If you like. Feel free to call the Editor of your favourite publication so you can tell him of your thoughts. He would like that, I’m almost certain. Do you think that all those folk blundering about the place with phones welded to their heads are discussing anti-sumping valves? It would explain a lot…