You might expect that everyone sufficiently fortunate to ride old motorcycles would inevitably be cheerful. Frank Westworth can’t understand why not entirely everyone is…

Gloom. You get to recognise it as it walks towards you. ‘Another old one’s gone.’ I gaze with a familiar sinking sense of inevitability at a man who has materialised before me. I must have dozed for a moment. First there was no-one there, and now there is. This is like the rider’s equivalent of ‘I’m sorry mate, I didn’t see you’.

‘I’m sorry mate, I didn’t see you,’ I reply, friendly-like. ‘What did you say? Who’s gone? And where?’ He is unamused. Resolutely so. That’s OK. He has come to darken my lightness by announcing that a well-known motorcycle emporium from the classic age has closed. You may have heard of this particular one, so to avoid causing offence they will bask in anonymity. But they’ve closed, apparently.

‘Good,’ I reply. ‘They were rubbish. Good riddance.’ He is outraged. Of course he is. Everything which closes is a sign of moral decline, or the end of the world as we know it, or something unlikely. ‘Did you ever shop there?’ I ask, innocently and with a big fat friendly smile. He shuffles. He didn’t, then. I did. Once. And only once. That was once too often. After my single visit I decided that rather than exchange any of my shillings for their expertise I would give up motorcycling, throw the motorcycle away and take up origami. They were dreadful. Horrible people and crooked with it.

My refusal to have anything to do with them actually cost me money. I had recently begun earning a feeble living by writing about old motorcycles, and the editor of a top magazine had asked me to report on this very shop, which was selling bikes for which it claimed great things. Like … they were brand new Brits, built from ex-factory stock. This was simply not true, as I discovered. The bikes they were selling as new were ex-African white police bikes repainted in good British civvy black. The example they started for me sounded like it still had a crankcase filled with desert sand. Not a romantic sound. And it was unrideable. I went away and never went back, but not before the alleged proprietor called me several very short names. Nice man. Dead now.

I told this tale to the gloomy man, sharing with him the name of that deceased individual. He was amazed, and appeared to cheer up. Blimey, he might have said; why had I not written it up? Because British law doesn’t allow it, I revealed.

‘But don’t you think it’s sad that the shop’s closed?’ he wondered. No, I don’t. His view was that all the old shops, the old shops which sold our old bikes when they were new bikes, should somehow stay open forever, despite in too many cases being terrible, staffed by unpleasant men who took the mickey out of their customers, lied to them, stole from them and did dreadful things to their bikes. Here’s one now.

My friend’s very first Commando was a slightly secondhand yellow one. Bought from a shop; a well-known Norton specialist of whom you will have heard. The test ride felt great, much more great than his T140. They did a deal, agreeing to prep the Commando, bring it to his house and take away the Triumph. There was a delay. He wondered why? It had been caused because the engine had developed a knock and had been rebuilt to be on the safe side. It was now great; new main bearings. Wow, we thought. What a great bunch of guys. 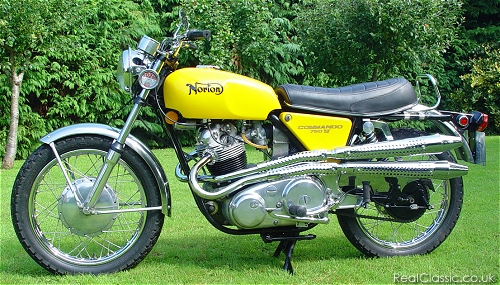 About a month later my pal asked me to ride his shiny yellow Norton. ‘It has,’ he suggested, ‘a bit of a knock.’ Did I have any ideas? I rode it around the ring road as rapidly as I dared. The knock was a big knock; I habitually wear open-face lids and they muffleth not the knockings. The knock was the primary chaincase banging about on the crankcase. Plainly it had come loose. Out with the spanners.

The reason the chaincase was loose was because it was not bolted to the crankcase. The reason it wasn’t bolted to the crankcase was because the driveside half was from a Norton Atlas. The Atlas crankcase does not fit the Commando primary chaincase. A horrible bodge. He called the shop. It was fine when it left, they told him; he must have messed around with it and broken it. And that, gentle reader, was that.

I bought in 1976 a T140 from a prominent Triumph specialist. After about a month the oil light came on. I was headed from North Wales to Norwich. I stopped at a big town’s Triumph dealer. They said ‘Aha, it’s the timing cover seal. Costs 2/6d.’ Great, said I, happy, can I have one and can I borrow the tools? No, they said, I could not. They only had two and they were keeping those for regular customers. I rode slowly and sadly down the A5 until I pulled up at the old Devimead shop on Watling Street. There, Mr Mason the proprietor fixed the seal in about a quarter hour, and I went on my way, light no longer flashing. 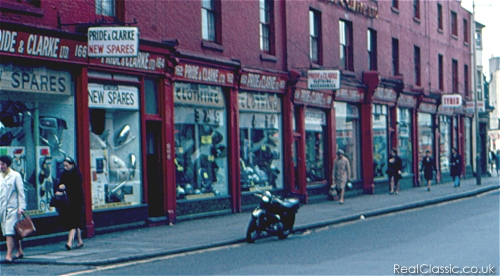 I could fill this magazine with similar tales of old bike shops – and with the reverse; great tales of great guys who knew lots and helped anyone. They usually stayed in business until retirement, and it’s a shame they went. But not all old shops were great. Trust me on this; sometimes it was a good thing when they closed. Sometimes…