Frank Westworth has been thinking back to days gone by, and to AJS and Matchless CSR twins of ancient memory…

I’ve been plastering about the West Country aboard a CSR twin of glorious madness for the last several months (in between taking long leisurely holidays, as a chap should), and fell to wondering exactly what a CSR is, what it does, and what it was for, back in those distant days when you could still buy a new one.

Being a noted anorak about these things, I occasionally wonder how all things AMC developed back in those days when they were, as it were, still developing. For example, you have a nice, pleasant, competent cooking 350 called the Matchless G3. You add a little lightness and a set of telescopic forks and it becomes the G3L; ‘L’ for Light. So far, so logical.

Then you decide that you want a sporting version of your cooking single, a bike which RealChaps could ride to work every day, back in the day when everyone had work to do, of course, and could ride in competitive events at the weekend, back in the day when there were events which anyone could enter without extending their mortgage… You could, if you wanted, define this competition model by adding a ‘C’ to the model number: the G3C or maybe G3LC, perhaps. ‘C’ for Competetion. You could also denote a model with rear suspension, or springing, by adding an ‘S’ to the number; G3LS springs to mind. OK, OK…

Shifting tracks for a moment, as a chap should when confronted by facts, let’s take a look at the early twins. The first was the Matchless G9 (I’m assuming that you can do your own AJS conversion), and as all the twins were always rear-sprung there was no point in having an ‘S’ in the number. Although I would have included one, just to make the point that AMC never wasted time trudging down the blind plunger alley. But what do I know!

AMC Twins appeared in 1948, and although they occasionally had names as well as numbers, they appear to have avoided letters after their numbers until 1957, when the first CS twin appeared; the G11CS. ‘Competition Sprung’, then? OK. ‘Competition Sports’? I’ve read both versions; RealChaps will know the truth, of course. Later in the same year, the G11CSR bounded briefly into the limelight, and then bounded immediately out of it again, both 600cc twins being replaced by the hot new 650s.

To add to my endless confusion, after ditching the 600 sports twins, AMC promptly added sports versions of the 500 twins to their range, in the form of the very sweet indeed G9CS and G9CSR, but only for a year and a bit…

When the 650 range was launched in 1958, it came complete with CS and CSR versions (and a DL version, just to fool latter-day anoraks like yrstrly). But hurrahs for that, because the G12CS and G12CSR were both handsome machines, and capable of mixing it in the pale white heat of competition, as many Jampotters will remember. Somewhere, I still have a pic of my old friend Ernie Merryweather racing a CSR twin. Was it a short race, Ernie? We should be told…

Because that was the function of the sporty twins, was it not? To provide a less exotic and entirely road-practical alternative to the ever-more-serious ‘true’ competition machinery, be it those ever-lighter off-road singles or ever-faster ohc road racers. If you trawl back through the motorcycling publications of the day, you can find all manner of unknown riders having all manner of fun racing their sports twins, and indeed in the US they were pretty well respected off the hard stuff, too.

Now then, he says, drifting slowly to the point of this gentle ramble; when did AMC decide that their sports twins should just be cosmetic variations on the stock roadster theme? I ask this because of the CSR I’ve been bogling about the sanctified lanes of Cornwall recently. It’s a 1965 G12CSR (thanks again, B!M!), and is mechanically identical to the standard roadster twin of its day. In fact, the only real differences I can uncover are the mudguards, extra chrome and a stock Siamese exhaust. Oh, and a magneto.

Did AMC abandon all pretence at the sports twins’ competitive abilities when they dropped the G12CS after 1960?

The G15 range continued along the campaign trail, with CS and CSR versions of these wholly splendid 750s being very different, and with the G15CS retaining some serious desert sled credentials in the US, while the UK version of the G15CSR provided a toothsome alternative to the more mundane Bonnevilles and Spitfires … but not for very long, sadly.

But there’s a thing. If AMC really did abandon all their sporting twin aspirations, were they right to do so? I’ve been in the joyous position of being able to borrow other folks’ bikes for many, many years now, and have ridden lots of CSR and CS twins. In my mind, the ultimate CSR – in what I perceive as being the true sense of ‘CSR’-ness – is the 1963 version. I rode a 63 AJS 31CSR for a while, and it was glorious, if too shiny to cope with life in The (salty) Shed and the corrosive airs of Cornwall. That machine was everything a CSR should be; fast, twitchy, brash and raucous; marvellous. 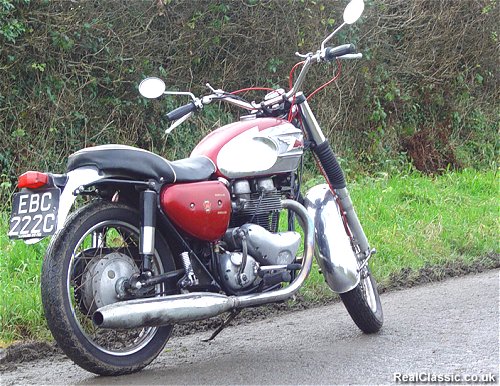 The bike which followed it; the CSR which I am currently riding with considerable delight, is not like this. It is a waffly sofa of a bike. It still retains the CSR vanity of a manual magneto to spark up the engine, but in truth the engine is so softly tuned that when the mag inevitably fails I shall replace it with a distributor and automatic spark advance. The chassis is also completely roadster. Gone is the slight nervousness of the 63; replaced by softer Roadholder springing and better Norton brakes. Gone also are the skimpy tall seat and 19-inch wheels; the 65 CSR has the same capacious comfortable seat as the stock roadster, and the 18-inch wheels allow even pedestrian riders like me to feel heroic as we grind the stands away on gentle corners.

But is the last 650 CSR any the worse for these steady softenings? No. Well, that’s what I think. So, by 1965 ‘CSR’ stood for Comfortable Sofa Roadbike’, or did it? Over to you…