Frank Westworth thought that he knew everything about everything AJS did in the past days. He didn’t. Doesn’t…

Did you know that AMC supplied bikes to the mighty forces of law and order? I didn’t. Well, that’s not entirely true. I knew they supplied Nortons Atlases to the plods, but not mighty Matchless and hallowed Ajays. And I only knew about the Atlas connection because I had one once. An ex-ploding Atlas, that is. With the wisdom of youth I converted it into a Triton. With the hindsight of age I recognise that converting a 49bhp 750 twin into a 34bhp 500 was not an entirely wise move.

A police Norton Atlas. Exactly like the one our hapless antihero rebuilt into a disastrous Triton. O the follies of youth, so forth…

But policemen riding Ajays? That was a new one to me. Until, that is, I was sent the rather excellent photo of an AJS machine complete with constabulary character which may appear somewhere near here. What a fine machine. And when I remarked upon it to a fellow AJS & Matchless clubperson I was told in peremptory tones that in some parts of the country the polis rode about on AJS Model 14s. Heck. Those entirely performance-free 250 singles must have terrified the local unlawful.

Have you ever seen an ex-police AJS fuel tank with the radio cutaway? Again; I’ve stumbled over lots of Triumph and several Norton ones, even a few BSA versions, but cannot recall ever finding an AMC one. No doubt Noted Experts have a thousand of them, and you probably have a half dozen doing plant pot duty, but my life has been devoid, as in so many things. Sigh.

In fact, though, the Ajay 650 twin would have made a very decent police machine. Sound engineering, stolid performance, reasonable reliability, and that certain easy-to-live-with good nature which is what always draws me back to the familiar world of the AMC motorcycle whenever I stray into foreign fields. By foreign, I mean Shenstone or Small Heath rather than Plumstead, not Hammamatsu, you understand. 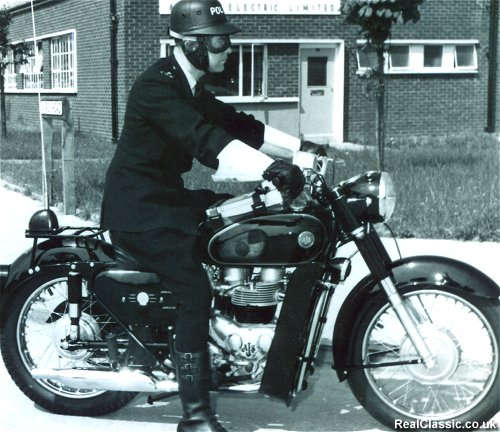 The Police also rode AJS motorcycles. How great, how much more fun than a Triumph…

My motorcycling encounters of the constabulary kind have generally been the more traditional type. Me riding some dodgy AMC horror or other, while the policeman…

…it was 1972. It was lunchtime on a Sunday. The pubs were about to shut, which they did early on a Sunday afternoon in those days in Somerset, I had already been to church (strange, but true) and had therefore developed a desperate thirst. A need for a glass of that glorious fermented apple juice which fuelled so much of my youth. I was a youth, therefore; a youth in a hurry.

321 KUP was my mount of choice. It was also my only mount, because in those days only the rich or foolish tried to keep more than one motorcycle on the road. 321 KUP was a 1961 Matchless G12, a close cousin to the AJS 31 in the police pic, in fact. I carried a pillion. He was called Geoffrey, was my top chum, and he had blown up his Ariel Huntmaster, being strong of right wrist and weak of brain power. Geoffrey went on to design RB211 jet engines for Rolls-Royce, so if you see a jumbo dripping oil onto the runway, you know who to blame.

And the hour of afternoon pubshut was fast approaching, as I’ve said. So we were going at a decent lick. A little more than the 30mph limit on Greenway Road in Taunton. We were going at 51mph, to be exact. How do I know this? I know this because a nice policeman told me so. Very kind of him.

While his collapsed colleague tittered away, Mr Triumph wandered around the Matchless, muttering darkly. He waggled the wheels and remarked that there was play in the wheel bearings. I displayed crushing knowledge and told him all about the bicycle type spindles and their need for play. He grunted in a predictably porcine manner.

There was more. My back tyre was illegally bald, he announced. It wasn’t, I countered. Geoffrey, being a proper engineer, produced a depth gauge from his overalls pocket, like you do. The tyre was nowhere near illegal.

There was more. The exhaust was so loud that I had plainly knocked out the baffles, announced PC Miserable Triumphman. Geoffrey produced a torch from his overalls pocket, like you do, and shone it into the deep dark of the silencer tailpipe. Baffles all present and correct. Good job this wasn’t Geoffrey’s Ariel, because he always knocked the baffles out of his silencers, being a proper engineer and understanding these things. This understanding of all things engineering was why Geoffrey rode more miles pillion on my Matchless than he rode on his Ariel. My Matchless may have been slow, and it was, for I have always ridden like a very old and cowardly lady, but it didn’t blow up every other weekend.

I received three points and an endorsement. No fine. Those were the days, so forth. Shame about PC Triumph. I reckon if he’d not been there, the nice PC would have let me off. I also reckon that this is why I have never really got on with Triumph twins. Some things never change…

The AJS and Matchless Owners’ Club can be found at www.jampot.com