Bennet Longman was so frustrated by the electrical shortcomings of his Ariel Square Four that he developed his own alternator conversion. So now he can ride at night with excellent illumination, without having to rev the engine senseless…

Owners of the alloy-engine variants of the Ariel Square Four will be excited by the possibility of fitting a 300-Watt alternator. This conversion unit can be fitted to the standard bike without modification to the engine castings. Re-use of the original Lucas dynamo drive housing and chrome end cap mean that the bike will, at a glance, appear standard.

I come from a family of Square Four riders (five – with the men outnumbered by the women riders!). My father, Bruce Longman, is well known in the Ariel Club and makes his living re-producing tin-ware for the Ariel range. Running several machines means that we are familiar with frustration caused by the 70-Watt Lucas dynamo fitted to these bikes. Unlike the earlier overhead cam and iron block squares which were fitted with magdynos, the alloy engine variant has a car-style coil ignition system. This means that once your battery goes flat you are completely stranded!

Over the years my father and I discussed many possibilities for fitting an alternator to solve this problem. Unfortunately little additional space is available over that occupied by the Lucas 3½ inch diameter dynamo. A permanent magnet alternator conversion that was available a few years ago gave reasonable results but unfortunately required some of the fins to be ground away on the back of the cylinder block. 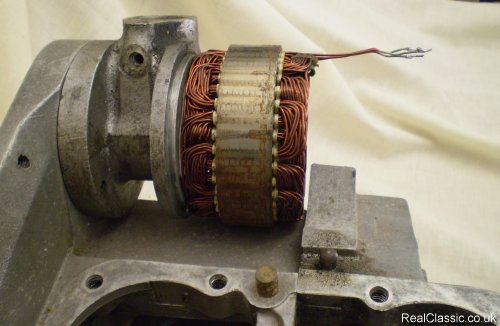 Eventually, in early 2007, I got so fed up with the problem that I was spurred into action. After purchasing a number of modern Japanese bike alternators I came across a Nippon Denso unit which, although too big to fit as a complete unit, turned out to contain a petite 93mm stator. The Eureka moment came when it was discovered that there was room for the naked stator between the standard dynamo drive housing and the original dynamo mounting on the crankcase. Fill in the blank spaces and you have a working alternator! 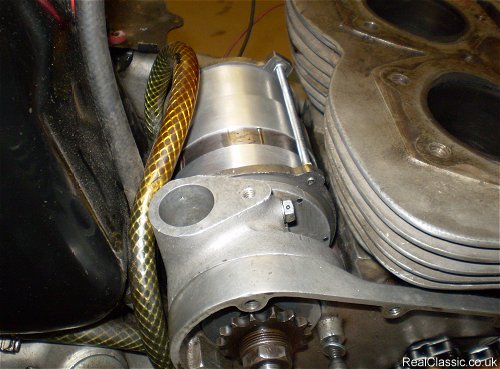 Tight space and the requirement to attach an extension shaft to the Kawasaki rotor presented considerable difficulties. The coupling must not only be robust but allow the sealing arrangements, distributor drive and drive sprocket mounting of the original dynamo to be replicated. There is also a machined saddle cast on the rear of crankcase that provides a seating for the original dynamo. This represented a problem since the alternator body would need to be of a larger diameter than the 3½-inch Lucas dynamo. 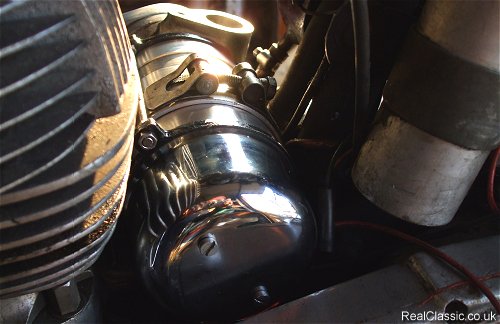 Six months work solved these problems and a first prototype was finished and fitted to my Mk2 Ariel for testing. I was delighted with the results. Enough output was available to balance the headlight on full beam from a shade less than 30mph even extra tall solo gearing fitted. The surplus of power available also maintained a fully charged battery and kept the system voltage at a healthy 13.5-14.0 Volts. At this correct voltage the halogen headlamp bulb was able to provide excellent illumination, night time riding was now a joy and it was immensely pleasurable to burble around town in top gear rather than having to ride in third or even second in an attempt to keep the engine speed up. 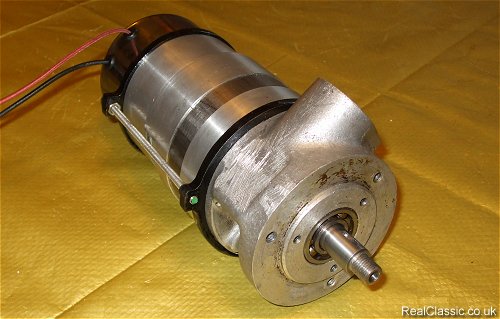 An article on the unit in the Ariel Owners’ MCC magazine generated a considerable amount of interest and encouraged me to further develop the unit for production. Working part time on the project for over two years has allowed me, through further prototyping and testing, to refine the design and arrange for major components to be manufactured by outside suppliers. The design and building of various special tools, jigs and test apparatus mean that finished units can now be supplied fully tested at a reasonable price.

The Ariel Square Four alternator conversion is available from Bennet through his business, Iron Horse Spares.

The Ariel Owners’ MCC can be found at: www.arielownersmcc.co.uk