The AJS and Matchless Owners’ Club are celebrating the official centenary of the AJS marque this year. All are welcome to join the fun…

The origins of the AJS marque date back to 1897 when four of the five Stevens brothers, sons of a blacksmith, produced their first motorcycle using a proprietary engine. After a few years they decided to introduce a new name for their motorcycles and chose to use initials only. Only one of the brothers, Jack, had two Christian names (Albert John), so the new marque was christened AJS. The AJ Stevens Co was formed in 1909 and the first complete AJS motorcycle was built in 1910 – this bike being the earliest AJS machine to incorporate both an engine and cycle parts manufactured by the family concern. So the 2010 anniversary celebrates the 100th year since the first AJS motorcycle left the workshop…

During the initial years of AJS production the company built a wide range of machines, enjoying considerable success in the early TT races. AJS motorcycles took first, second, third, fourth, sixth and eighth places in one Junior TT, and clocked the fastest lap of the race at 52.11mph. At that time the Tourist Trophy races were phenomenally popular in the early 1920s, with over 65 motorcycles from 23 marques competing in the 1921 Junior race. Just seven of those 65 entries were AJS bikes – and six of them came home in the top ten finishers.

Competition in the Senior TT was even more ferocious. Fifteen different manufacturers were vying for victory in the Blue Riband event, fielding 68 riders. Norton boasted 15 machines, Triumph and Sunbeam had nine opportunities for glory apiece; six bikes lined up for Scott and BSA. AJS had just two chances – and although the bikes were kitted out with new cycle parts for this race, the AJS engines and riders had already completed the full Junior TT. And they were 350s, of course, competing in the Senior 500 class. 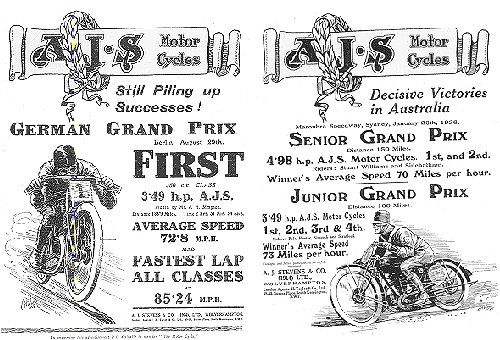 Despite tough opposition from all over the world – Indians finished second and third – the OHV 350 AJS came in first. Howard Davies was the man of the moment; he was placed second in the Junior and took the top honour in the Senior. It was an astonishing achievement which has never been repeated. Davies saw off the very best big capacity competition in the world with his 350 AJS, and when the race team returned to their Wolverhampton home they were greeted by a full civic reception.

By 1930 the company held 117 world records but was in financial trouble. After 1931 the only true AJS’s were the racing 7Rs, Porcupines and the AJS Four. The AJS marques was taken over by the Colliers brothers in 1931 and combined with their existing Matchless concern, forming Associated Motorcycles in 1938.

The AJS and Matchless Owners Club now caters for individuals and families who have an interest in either AJS or Matchless motorcycles. The club produces its own monthly magazine that is distributed to over 3600 members worldwide, as well as having its own spares scheme to assist owners in keeping their machines in top working order.

Entries for the run close on 30th April 2010 to ensure inclusion in the programme and qualification for the issue of a ‘Commemorative Run Pack’. Enquiries for the event in the interim can be addressed to centennial@jampot.com

Events on the Sunday will include demonstration runs featuring a number of famous sporting products of Plumstead. Appearances by a series of special guests closely associated with the models through the years including runs on machines that made them famous. In addition there will be a display – both static and running, of at least one machine from every year of AJS production throughout the 100 Years.

Trade stands including a display of the current range of AJS machines, imported by AJS of Andover will be in place through the day together with an autojumble.

Application forms for the event are available from the club’s website: www.ajs-matchless.com/centennial