Malcolm Arnold runs and rides AMC bikes; among them is a favoured 650 twin from 1963…

‘I always hankered for an AJS CSR. The previous owner had lost faith completely in this one so I knew it was going to be a challenge. Every time my wife came out with me it always had a sting in its tail!’ Malcolm Arnold bought his 1963 AJS 31 CSR in 1992, as a non-runner: ‘to say that this machine has had a hard life would be an understatement.’

The AJS was run and repaired for several years and then completely rebuilt in 1996. Along the way Malcolm made a few discoveries: ‘why AMC recommended using oil rather than grease for lubrication on the swinging arm pin is beyond me. Trying to keep the oil in is difficult and I now use a mixture of oil and grease.

‘The carb was completely shot so I replaced it with a concentric. Despite what some say about concentrics, I have found it to be a very good carburettor.

‘When the cylinder heads were found to be badly warped a friend from the AJS and Matchless OC produced an almost-new set of cylinder heads saying; “replace them when you can.” Such is club life – such camaraderie!

Malcolm has fitted platinum-type NGK spark plugs, which ‘cost £20 for a pack of four, but the difference in running and tick-over (even when the engine is cold) makes them well worth the expense.’ 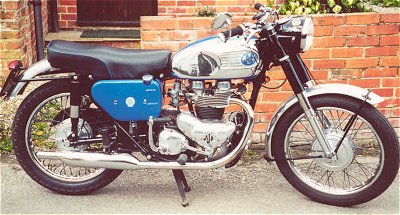 And speaking of expense: ‘The AJS has cost far more than my other bike, a G12, to get to a satisfactory condition. I could spend even more on it getting it to concours condition but I ride both my bikes regularly in all weathers so there will always be an ongoing replace / renew / restore programme. I like to keep my bike clean and pay them attention but more importantly I like riding them too.

‘I hope I’ve now got the AJS sorted, although my wife still views it with suspicion!’