Some classic bikes stay with you for life. Tony Ayliffe went a-courting on his Ajay, took it on honeymoon, and doesn’t seem to think they’ll ever be parted…

It was the 2nd March 1976, I was 20 and had taken the day off work to go in search of a new bike with my mate George. At the time I owned a Austin 1100 Countryman, which was a forerunner to what we now call a hatchback, the ones that always suffered from rusty sub frames. It had hydrolastic suspension — what a great invention. If you carried anything heavy in the back you could study the tops of trees with your headlights. It was this I wanted to trade in against my new motorcycle, as yet unknown.

Pride & Clark in Brixton were one of the few places that offered to trade cars for bikes so off we went to see what deal we could do. After a quick response from the dealer we were back in the car (the one he didn’t want!), back to Bishops Stortford where I lived. We looked around the local dealers but there was no deal to be had. I was feeling despondent when George mentioned his mate’s dad has a bike he might want to sell. Why George didn’t mention this eight hours earlier is a mystery…

My first bike had been a BSA Bantam D14/4, in black, a 1968 model (the ‘4’ referred to the four gears). I bought it on my 16th birthday, as that was the age you could ride anything up to 250cc. I remember stripping off the black paint from the fuel tank to reveal the chrome underneath, because I thought it made it look better. What did I know? When you’re 16 you know everything — and absolutely nothing.

My next bike was a YAS1 which was the 100mph Yamaha 125 that I took my test on. It was a very different affair to today’s test, using hand signals and driving around the block all within sight of the testing station! My next bike was a CB250 which I bought from the local shop only to find it only went 60mph. Disgusted I took it back to find the big ends were knackered, but the shop was good and replaced all the parts required.

Back to George’s mate who lived a few miles out of town and who had this 1958 AJS 600, which he had recently finished repairing and which was painted black and white. I convinced him he should sell me this and we negotiated a £100 deal. I rushed off to insure it and raced back to collect it so I could collect my future wife from work.

‘Remember’ the owner said ‘it’s not like that Japanese rubbish; if you open the throttle too quick you will be on the other side of the road’, which I found to be true within about 10 minutes of collecting it. I proceeded to collect my girlfriend from work who looked amazed when I turned up on this British bike; she had been expecting Japanese as by this time they were now dominant in the market, We set off home still coming to terms with manually advancing and retarding the timing, or putting the choke on depending on what lever I pushed.

It was coming up for 28th May 1976, the day I was to be married at 12 o’clock at the local register office, but there was the important thing of MoT testing my bike at Harlow before I got ready. It duly passed and I asked my Nan if she thought it would be OK to ride down to the wedding in my suit — to which she suggested not, so I walked.

Our honeymoon was to be a romantic trip to the Isle of Man TT races with the Bishops Stortford Motor Cycle Club and the rest of the lads, my wife being the only female in the group. The day came and off we set, looking forward to seeing Mick Grant and his Green Meanie race around the Island.

We had travelled around 150 miles when the AJS coughed and spluttered and we had to pull over to see what the problem was, feeling guilty that we were holding everybody up. Luckily my uncle was old school and diagnosed a missing carbon brush from the magneto, great — except I didn’t have a spare.

‘Have you got a biro’ he asked. I thought he was going to give us the telephone number of a breakdown company… ‘and a pencil, and a piece of wire’. He duly whittled down the pencil to brush-size, placed it in the biro spring and made a connection from spring to pencil with the wire. Now why didn’t I think of that? He reassembled it all, kicked it over and we were on our way. We bought another brush on the Island from a fellow AJS rider but did not install it, and ran all week and back home on that pencil.

It was on Mad Sunday that I learned a lesson about drum brakes and about going as fast as you dare over the mountain, being overtaken on both sides by those Japanese bikes. We were doing OK, two-up, heading down towards Creg Na Ba at about 85mph. I braked early and realised I was not slowing as much as I would like, with what looked like a 90-degree bend looming. So this was brake fade!

The straight run on was blocked by very sensible people who watch the lunatics doing their thing, one of whom was yours truly. The only option was to try to take the bend and miss the straw bales — which fortunately we did. Just.

We were sitting down at what we thought was our penultimate breakfast when the landlady asked what time we would be out of the room. ‘About 10am tomorrow’ we said.

‘Oh dear – you’ve only booked until today and more people are coming to stay. I’m afraid you will have to leave and find somewhere else!’

She rang around and, bearing in mind this was TT week, magically found us a room. But it was just the one room for all of us to stay in on our last night. Well that made the honeymoon memorable!

After a few years the bike found its way into the shed and the children came along, we moved from to another house and another shed. Time had taken its toll; rusty wheels and paintwork and oxidised alloy, perhaps I should try to sell the AJS? I kept it for so long because was aware of all those people who look at old machines and say ‘I wish I’d never sold my old bike or car — I would love to still have it.’ This lesson had stayed with me and I was not going to be one of them. 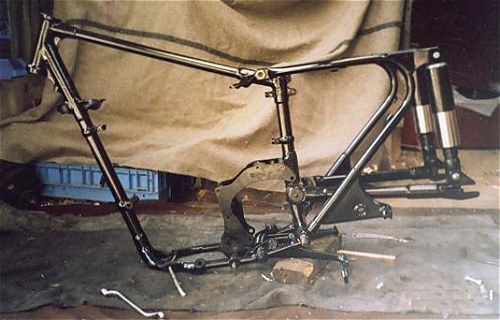 Unfortunately I do not have the skills in my hands or knowledge to get this bike back on the road, so I asked Norman. Now Norman was 70 years when I asked him but he was fit and enthusiastic and he was up for the challenge of restoring this bike back to its former glory. He is one of those engineers who doesn’t see problems — only solutions – which is a wonderful talent for us onlookers who watch scrapheap challenge every week and marvel.

The bike was totally stripped and I duly started to source the parts. I’d seen a sticker in a rear window of a car about the AJS and Matchless Owners’ Club with a Kettering phone number. Everything I wanted they could supply, including advice on where to get a new seat and exhausts. Was it the cheapest way of getting parts? Probably not, but I felt the profits were going to a club that I wanted to be there to support my fellow riders. 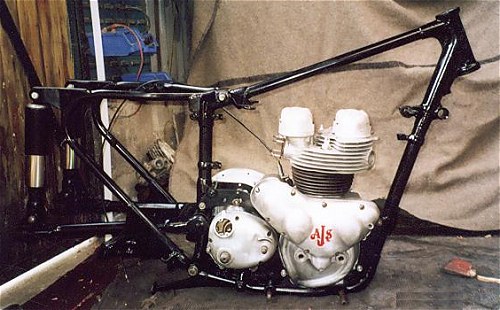 I started to keep receipts of how much it was costing and occasionally would do a running total. Bad idea! I quickly abandoned it, realising that people don’t do this and expect to get their money back! New British chrome wheels and British tyres, powder coated frame, chroming and stainless steel parts where available, £200 on that magneto that used to be OK with a pencil…

Finally it was finished. What a sight and sound! All that was left to do was rush round and show everyone who had been following the bike’s progress.

It was only 300 miles later on a early May evening, with the sun shining, when I arrived home from work and thought to take a quick ride to my local town five miles away and back. I threw on my helmet and a pair of gloves and away we went… 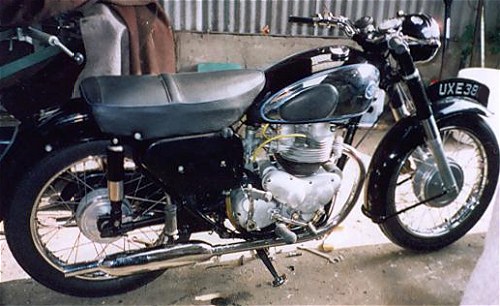 The sun was low in the sky when the lady driver pulled out. I flew across the bonnet onto the ground and lay there, unable to get up.

People rushed across and my first words were; ‘How’s my bike?’ because I couldn’t see it. The engine stalled — no engine damage, I hoped. It took a few phone calls for my bike recovery to be taken care of, it was not going to stay at the side of the road unattended.

I had broken my femur, and even with that gas and air (the stuff pregnant mothers get), it hurt despite my head spinning around on my shoulders with the effect. It’s at this stage when you think should you have worn all that protective clothing on. Would it have helped? Would you have needed to have your leg pinned and screwed? It would be five months later before the crutches could be discarded. Believe me, it’s a long time to be visiting your local hospital, and not be able to carry your own cup of tea. The AJS recovered quicker, requiring some front end repairs with help yet again from the club and Norman.

So after 28 years we are still together. I find it difficult to understand how people put heart and soul into restoring these machines, only to sell them. Perhaps it’s because they have that ability to do another one, perhaps better than the previous one.

Mine is written in my will, and so is definitely not for sale. 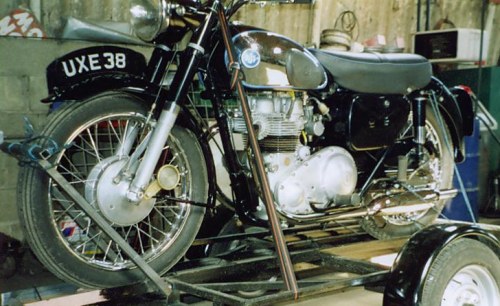