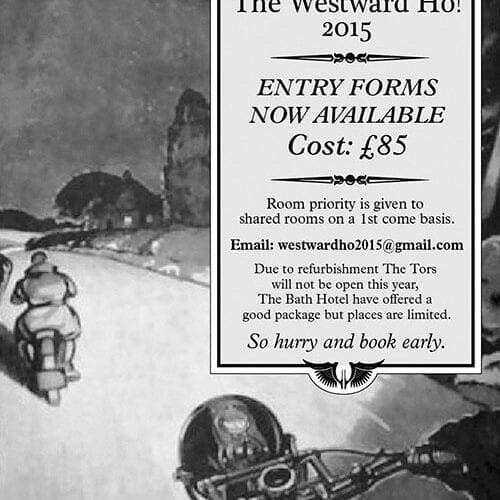 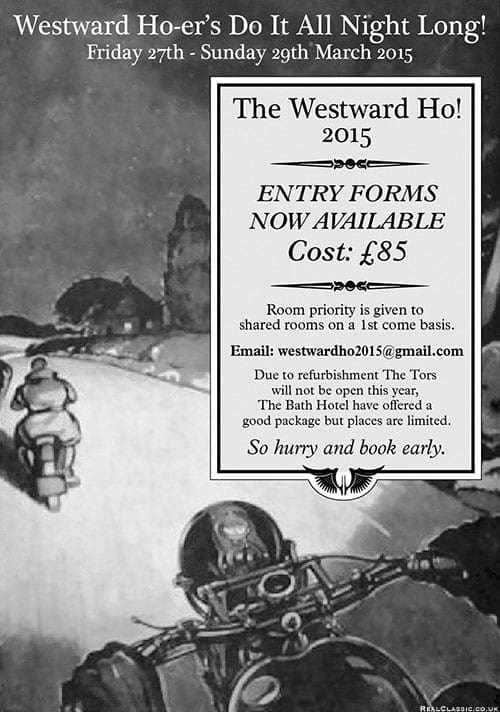 There’s just time to enter your classic into this year’s Westward Ho! Reliability Run – or make a date to visit Devon at the end of March and cheer on the intrepid competitors…

The original Westward Ho! Reliability Trial started in the 1930s, organised by what became the Newbury and District Motor Club. The event ran annually throughout the decade, only to end when the hostilities of the Second World war commenced. Back in the day, the Reliability Trial began in the Newbury area. The route was marked with coloured dye by advance marshals: white by night and blue from daylight on. The route typically ran to some 170 miles, with riders leaving in pairs at timed intervals from 11.15pm onwards. The riders’ route card was fairly detailed, with mileage and time for each direction change given.

In 1933, for example, there were five checkpoints within the first two-thirds of the run. The target average speed was set at 24mph, and the winner was the rider who came closest to maintaining that pre-defined speed. The finish was at County Gate on the Somerset / Devon border. Thereafter many riders would set off straight back home – a hardy breed indeed!

A group of AJS and Matchless Owners’ Club members from the Sussex Section have now resurrected this historic event. The 2015 Westward Ho! Reliability Run will take place from Friday 27th to Sunday 29th March 2015. The preference is for riders of pre-war and classic motorcycles but consideration will be given to other vehicles at the organiser’s discretion.

The 180 mile run will start at midnight from The Weyhill Fair public house at Weyhill near Andover in Hampshire. After an arduous but entertaining night ride, the run finishes before breakfast on Saturday 28th at the main car park in Lynmouth, North Devon – a perfect opportunity for spectators to pop along and greet the entrants as they complete their epic adventure.

Unlike the days of old when the riders then set off back home, this year’s event will continue with a full English breakfast at the Bath Hotel, Lynmouth, where rooms will be available for weary riders to catch up on some hard-earned sleep. The weekend culminates with an evening dinner with fellow riders at the Bath Hotel.

A breakdown / recovery vehicle will follow the run. Accommodation, from Saturday breakfast until 11am on Sunday 29th March, will be priced on a room-share basis, this includes breakfast Saturday and Sunday and the Saturday evening dinner, at £85 per person. Priority will be given to group booking of rooms. Nearby hotels will accommodate the overflow. Entries closes on 15th March 2015 or earlier if full.