In the first instalment, Dave found and bought his dream bike (or a large box of bits depending on how you look at it). This time: wiring and shocks and going for a bus ride…

I spent the couple of days after getting my project bike home going through the bits and pieces, trying to decide what was restorable and what needed to be replaced. I also made up quite a shopping list of parts which were missing. I had got with the project a very useful copy of an original owners’ manual, packed full of useful techno stuff and diagrams, one of these being a wiring diagram.

So, it was with this and the old harness that the first confusion started. The wires coming from the stator, although they matched the colours on the diagram, seemed to be two wires short. The wires attached to the rectifier were correct, but colour matches to the stop lamp and stop lamp switch were wrong. Now this wasn’t too disconcerting, as I had already decided that a new harness was required, but what it did mean was that I couldn’t be certain of what was originally on the machine and what had been acquired separately. Oh the joys of not doing the strip down yourself!

Now I’m not one of those ‘it must be an original 4321 grommet’ sort of people but I wanted it to be as near as possible, and my experience with the wiring loom confirmed that another challenge had arisen. My next step would be to try and find out exactly what a 1960 T100A should or shouldn’t have fitted.

I embarked on the first of what would be many visits to the Kempton Park autojumble where a full parts list was dully purchased — a document, which I’ve found, is a must for anyone undertaking this type of venture.

So, back to the stator. I soon worked out that a later stator (I’m even getting poetic) and lighting/ignition switch had been fitted and with some delving on the Internet and finding some copies of original Triumph Service Bulletins, I found that at least the rotor was correct. At last!

In between the investigation process, operation Clean Up began in earnest. I was lucky in that working for a large bus company, I had access to a very efficient parts cleaner which I made great use of (thanks Arriva), and after purchasing a fine polishing kit from Perfect Polishing, really got stuck in.

So after many long hours of cleaning and scraping I was about ready to start painting the tinware. Luckily I had a complete nacelle and bathtub in pretty good shape. I used an anti-rust primer, which although in aerosol cans did a great job in bringing the sad looking bits into life.

I bought new chrome bottom covers for the Girlings (the originals were beyond repair), and new bushes. With a couple of coats of fine black paint, I had restored the first part of my project. At this stage I felt so proud of my achievement that I had to attach them to the frame. They looked great with the shiny new chrome and it inspired me to carry on in earnest. I’m pretty impatient and couldn’t wait to paint the oil tank and fit it to the frame. However after that I learned to take my time over the preparation and painting.

I spent the next couple of months slowly sourcing and buying some of the missing parts of the project. Again I found the Internet a real bonus when it came to scouring for parts available. I even ended up buying some new old stock ignition parts from a mail order dealer in the good old USA. It’s a bit annoying though to have to pay import duty and VAT on parts that originated in the UK…

Probably the best bargain I found was successfully bidding on a perfect condition and genuine front mudguard on the US eBay for $80 (about £45). Ironically, this turned out to be in a town just outside Melbourne, Australia. Ah the wonders of the worldwide web. This came as a real bonus, as I had searched most of the jumbles and rung various small ads with no luck what so ever. I had got quite used to that sorry shake of the head and ‘you don’t see them very often’ type response. 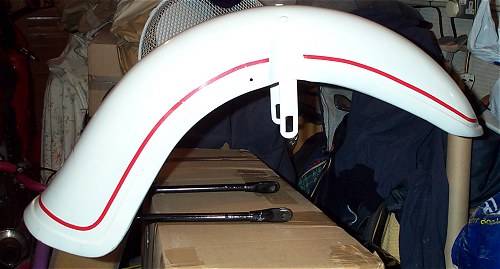 I found that Tri-Supply in Devon were very helpful and friendly when it came to locating that elusive part. It is a real advantage for someone with very little knowledge to be able to explain exactly what you need and then to receive a parcel usually the following day.

Having an office in Croydon is also handy, I would make regular trips on the bus during my lunch hour to visit Richard Hackers of Penge. It’s great fun sitting on the top deck of a 312 bus, gazing out of the window ignoring the other passengers as they try not to stare at the strange man in a suit clutching a pair of 1-inch handlebars or a set of shiny down pipes.

What next? Will the Trumpet all fit together? Will it then run? Will we see Dave riding it at the London Motorcycle Museum this weekend? Who knows! 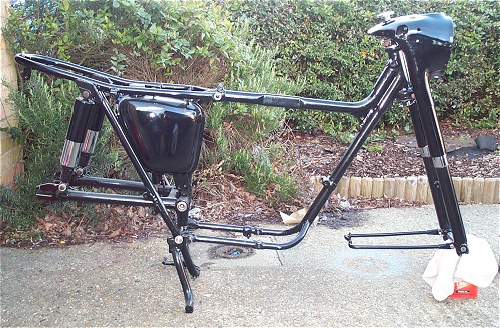