Not just a recent show winner, Brian Matthew’s ‘Beam probably also started life on a show stand back at Olympia over 70 years ago…

Isn’t this bike a beaut? It was judged to be one of the best at last autumn’s Stinkwheel Show at Beaumanor Hall, where it collected the award for Best in Class of its era. Owner Brian Matthews is rightly proud; this is a well cared-for example of the best of British craftsmanship, conceived and executed before the industry collapsed into the Great Depression.

OK, so what it is then? You’re looking at a 1930 Sunbeam Model 9/2; among the last of the old order, a motorcycle which gets pretty close to capturing the essence of the vintage-era tall single cylinder motor. It’s a 493cc ohv single, the road-going version of the very successful TT and GP racebikes which won the Isle of Man Senior in 1920, 1922, 1928, and 1929. When the Model 9 Sunbeam was first made, motorcycles of its class were still priced in guineas, not pounds sterling, reflecting their role as the gentleman’s conveyance.

Sunbeam motorcycles of the time were famous for being built by craftsmen dedicated to attention to detail. Tragatsch describes them as having ‘the best workmanship and finish of all singles built in England’, and the marque engenders such enthusiasm and loyalty that it has a dedicated and thriving owners’ club still running today. 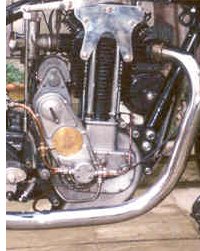 Back in 1930 when Brian’s bike rolled onto the road, the Sunbeam Wolverhampton factory had just been bought by ICI. The firm would be sold again in 1937 to AMC and then again two years after that to the BSA Group. It was a slippery slope into eventual ignominy, but not before BSA revived the brand for its postwar ‘luxury’ machine, the S7, a bike which bears no mechanical relationship whatsoever to the one you see here!

Brian has enjoyed many years with this Sunbeam, and has the pleasure of knowing exactly where it has been all of its life. He bought the Model 9 from an old workmate named Ted, back in 1976. Ted in turn had purchased it new from Sunbeam at the 1930 Olympia Show.

‘Ted told me it was the actual bike from the Sunbeam stand’ says Brian, ‘but of course I can’t prove that now.’

The Model 9 would have been somewhat overshadowed by the all-new 344cc Model 10 which Sunbeam hoped would be the star of the show. But the Model 10 did not fare well with the public in the depressed era, so perhaps it’s just as well that Ted bought the proven Model 9 with all of its racing credentials.

Brian’s ‘Beam now lives with his three other classics. They don’t get so much use these days, but he obviously still takes a real pride in his bikes. Congratulations on the award, Brian: your Sunbeam surely is a real show-stopper!