The international classic bike scene boasts many men of metal. Roger Slater grabs a chat with one of them, Sonny Angel of San Diego…

Few motorcyclists in England will have any idea as to who is Sonny Angel, but over in the USA it is a completely different story. Sonny has been a revered legend in the US motorcycle scene for over 65 years.

Born in Tennessee in 1926, Sonny still has that certain southern charm and manners. He was a born adventurer and avid itchy-feet traveller with a lifelong penchant for two wheels in all disciplines. Road racing, scrambles, dirt track, hill climbs, desert races, and yes, even long distance touring at home in the States and Europe.

Typical Sonny, he volunteered with the US Navy after the Pearl Harbour attack on the US in 1941. Well below required age at only 15, he had to lie through his teeth regarding his age to get in. His ship came under fire more than once, damaged but not sunk. With an ingrained love of the sea and his wander lust Sonny signed up in the Merchant Marine as soon as the war ended. He was now a ship’s engineer on vessels carrying all types of cargo all over the world. As you can see from the photo, Sonny has seen most of the world including the Baltic, Pacific, Middle East, Europe, India, Australia and the US. 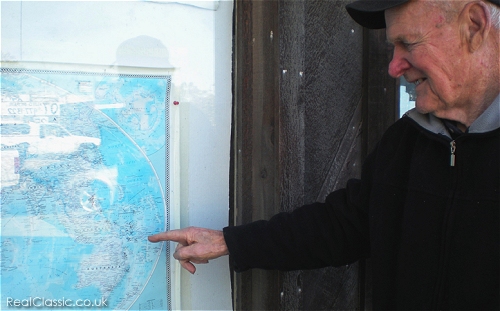 Sonny can tell story after story with a clarity and memory that would be impressive from a person 50 years his junior. One such story was a dire emergency when his ship’s engine seized up. Sonny and his fellow engineers had to painstakingly re-fit every crankshaft bearing by hand on the engine to get the huge thing going again.

Sonny left the Marine for a stint in England when he worked for Vincent in Stevenage where he started by assembling flywheels and then moved onto building the fabled Lightning. Sonny still has his own 1947 Vincent Shadow which he bought with his Marine pay. The Shadow was sold once, but Sonny bought it back a year later. Sonny remembers his trip to Bonneville with the Vincent where he achieved 144.95mph on the salt flats. He was competing with a pal who was riding a Harley; Sonny’s much-modified Vin was some 6mph faster than the American bike. He recalls replacing the Shadow’s original Brampton forks with the new Girdraulics – disappointingly the new front end did not show any improvement except for some ride comfort, and the Girdraulic forks were heavier.

A couple of years later, Sonny took to road racing on a Triumph, then an NSU and a Norton Manx. Sonny rode in the Isle of Man for the first time in 1963 on his 250 Yamaha. He recollects taking a box full of pistons and barrels as spares. All were needed after the bike constantly seized. ‘Whispering death!’ he reminisces about the two-strokes of the time.

Sonny purchased his bike shop in National City, near San Diego, in 1953. It’s still the same as it always was. Even the sign itself is an antique which came from another San Diego bike dealership. All Sonny did was to add his own name onto the sign and it hasn’t been touched since.

What a pleasure and privilege it was for me to spend a sunny Christmas afternoon in southern California talking to this fine gentleman. He is so well informed and endowed with tremendous experiences that he recalls with great accuracy and enthusiasm. Sonny is retiring and putting his shop on the market. On the top of his bucket list of places to go is back to the Isle of Man next June. Way to go Sonny.

More men of metal can be found in RealClassic magazine: Bert Hopwood is profiled in .