This coming year will be a busy one for supporters of the British bike museum in Brum, with opportunities to take classic bike tours or learn workshop techniques from the experts…

The National Motorcycle Museum in Birmingham, UK, runs a supporters scheme which gives ‘Friends of the NMM’ a wide range of benefits. These include special hospitality at various events throughout the year, track days, specialist insurance, a free BMS book, free admission to the museum itself and discounts in its shop, and more. On top of that lot, NMM Friends also have exclusive access to a range of unique activities. The first dates for 2016 have just been announced.


This hosted event will be held in the museum’s premier suite and features various technical sessions presented by staff, suppliers and partners of the museum. These include wheel building with Central Wheel Company, powder coating with Redditch Powder Coaters, and Norton race engine preparation with ex-works Norton mechanic and rider Norman White. The museum’s own restoration team will also be on hand to discuss some tricks of the trade. The NMM Workshop Days are free of charge to Friends of the museum as part of their membership.

NMM Friends are given the opportunity to ride a number of laps on various motorcycles from the museum’s inventory in a ‘closed roads’ environment within the museum grounds. Machines will include a selection of veteran and vintage motorcycles with lever throttle/hand change (training provided) as well as later machines from 1940s-1960s. There will be a choice of either morning or afternoon sessions with a nominal fee of just £5 for Friends to cover insurance costs. Further dates to be announced. 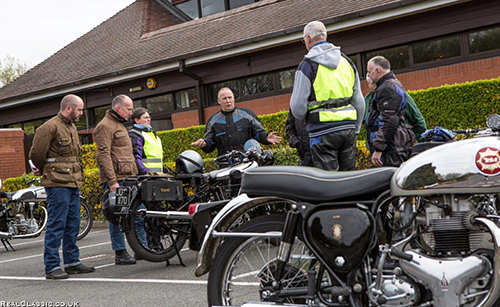 On three dates throughout 2016, NMM Friends have the opportunity to ride some of the most exciting and valuable classic motorcycles from the museum’s inventory. Those taking part will receive an induction and ‘off road’ training before being escorted by ex-police motorcyclists around the beautiful Warwickshire countryside. The machinery on offer varies from a BSA C15 to a Brough Superior SS100! Each class of machine attracts a different ‘hire’ fee which includes insurance costs and lunch in the museum restaurant.