Ash Gannicott wanted his own classic bike. One small problem: Ash is only nine. So doting Dad Russ swooped on this ideal opportunity to play with (sorry; rebuild on a tight budget) a miniature Italian cafe racer…

OK, imagine the scenario: you’ve got a few(!) bikes in your garage, a couple more at your workplace and a nine year old son. Said nine year old, Ash, has been dragged around race tracks, bike shows and autojumbles since he could walk, and he’s been carried around prior to that. Yes, sad to say he got the race overalls when other toddlers were in romper suits, a Ducati T-shirt when he was about four and now sports a denim jacket with various pin badges on it.

Needless to say (and much to my delight) he started getting referred to as a ‘chip off the old block’ and gets his photo taken astride my 1958 Tiger 100 in the same pose as I did at his age on my aunty Jenny’s Thunderbird. So far so good, and not that different from anyone else out there with a passion for bikes and a young son.

Ash’s small hands have proved useful in getting into tight spots on bikes and his eyesight has served to remind me of how bad mine is getting when I’ve had to recruit him to find a dropped shim on a messy garage floor. So I suppose it was only a matter of time before he started asking me; ‘when can I have a bike, Dad?’

The trouble is… this simple question filled me with both pride and dread at the same time. Never mind what his mother was going to say! Having thought long and hard about it, we decided that if there was a family tradition in this area, he was going to follow it eventually what ever we thought or said now.

To give a little background to what follows, I’d better explain more. My family’s biking connections have always seemed to go full circle. My dad bought his sister (my aunty Jenny of the aforementioned T-Bird) a Royal Enfield Flying Flea when she was about fourteen. In turn, she gave me a Royal Enfield J2 basketcase when I was fifteen, and eventually many years later I restored a Crusader Sports for her when she made a return to biking.

With that kind of heritage I knew that with or without our blessing Ash would get into bikes one way or another, and if he’s anything like the rest of us, probably before he was of legal age to do so. The decision was made and I told him I’d get him a bike — not one to ride, but one to restore. The thinking behind this was simple enough. In the eight years between now and when he’ll be old enough to ride it, he’d either have a great insight into how bikes worked and learn to respect them, or he’d get so hacked off with the whole thing he’d never want to look at another bike again. From a parent’s point of view this is a win-win situation!

So. What bike to get? With my collection of Italian bikes, Ash already had a leaning in that direction and I wanted to find something light, four-stroke and 125cc or less so he could ride it (unless the laws change) at seventeen. It also needed to be technically demanding enough to keep his interest over the next seven or eight years! 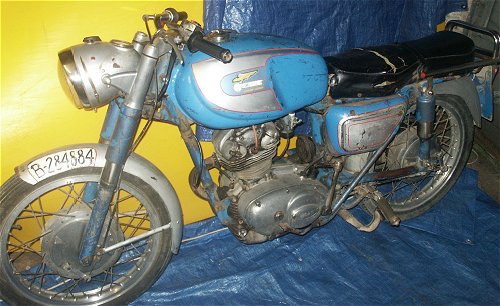 Salvation came in the form of a cheap little 125cc Mototrans Ducati which was complete but a non-runner, and freshly imported from Spain. The early Mototrans are fine as they share all the Ducati’s specifications and have some nice bonuses in the form of flanged Akront ally rims, which if brought over from a dry climate should prevent the need for costly wheel builds. I agreed with Ash that I would fund the project on condition that he let me borrow the bike until he was seventeen if we got it finished before then. I then set what I considered was a pretty unrealistic budget of one thousand pounds to cover the cost — not only of the bike, but also its total rebuild.

‘Artistic control’ was then handed over to Ash who had a free hand in how he wanted the finished bike to look. After I’d explained to him that we couldn’t shoehorn a 998 engine into it, he decided that he wanted a single seat cafÃ© racer with a gold frame and blue paintwork; so the project starts.

The decision to go the cafÃ© route was a good one for several reasons; if this was going to be his first bike, the single seat was going to prevent the temptation of giving pillion rides, there was no need for obsessive pursuit of originality and probably some money to be made back from the sale of unwanted tinware. Good news all round! 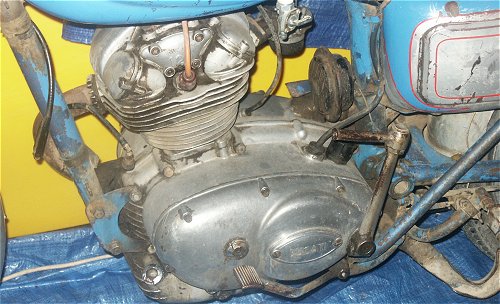 There are two main ways to attack a project like this; one, you can spend time and money getting the bike running to ascertain what needs to be done mechanically, or two, you just strip the whole damn thing and take it one step at a time through the rebuild. I opted for the latter as I thought the rolling chassis took priority over the engine which could always be sorted out at a later date. Ashley was armed with a 10mm spanner (about all you need to fully dismantle a Ducati) and set to work. Another great bonus of a dry-climate import is the ease with which all the fixings come out… no WD40 needed on this baby!

Once it was fully dismantled, we were able to take stock of what we had, what we’d keep and what we’d sell or use for trades. Lengthy research on the web and through old magazine articles on Sixties’ Italian coffee bar culture had given Ash some ideas of the style he wanted, so we were able to build quite a pile of un-needed bits including original bars, seat, mudguards, sidepanels and shrouded rear shocks. Some of these proved to be little gold mines, like the front mudguard which happens to be the same as the one on the Mach 1, and in its rust free condition represented the cost of a pair of ally guards and a new pair of tyres!

With some funds in the kitty, work continued. Next time: gold paint, a hand-operated sewing machine and smoke. Lots of smoke… 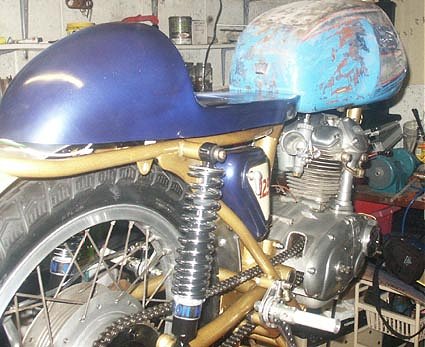