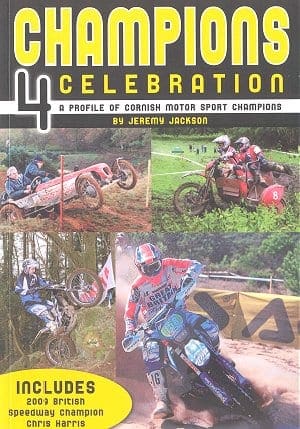 Every so often, small scale publishing turns out an absolute gem. We’re delighted to recommend this excellent book about the motorcycle sport scene in Cornwall…

‘Champions 4 Celebration’ is subtitled ‘A profile of Cornish motor sport champions’ which immediately limits its potential readership. This is a shame as it’s a very well written, meticulously researched and informative little book cramming in 17 profiles of local (to Cornwall obviously) heroes. The author, Jeremy Jackson, has obviously put a lot of time and effort into his research and has a writing style that puts more than a few of the glossy bike mag journos to shame. He really deserves a wider audience.

Despite the ‘motor sport’ part of the title and the Trials car shown on the cover, the book is almost totally bike focused with another picture of the same vehicle and a support van being its entire four wheeled content inside the covers. To be honest I’d say that’s the book’s only flaw; there are those who might be misled into thinking that cars feature a lot more than they do… or indeed in any way. Changing ‘motor sport’ to ‘motorcycling’ and another bike picture instead of the car would have given a better idea as to the content.

That however is nit-picking and when a review has to resort to that level of detail it’s usually a sign of a reviewer desperately trying to keep his piece from appearing to be a blatant advertisement or someone plugging a mate’s book. ‘Champions 4 Celebration’ is however that good and Jeremy Jackson deserves a much wider audience. A similar publication which featured nationally-known riders would be a massive seller with the same level of detail and standard of writing.

So much for how good it is (did I mention it’s very good?). No matter how wonderful the writing, as any teenager will tell you’ the important bit is what’s in it… innit?

Within the book’s 112 pages are profiles of 17 Cornish motorcycle sport of all descriptions, from Trials to Grasstrack, Motocross to Speedway, from 2009 British Speedway champion Chris Harris to Toby Martyn, British Youth Trials Champion at the grand old age of eight. Despite not having a road-racing circuit, Cornwall has always had a thriving motorcycle sport scene with long-established and well-supported events and venues so there’s plenty of material.

I spent about five years of my life living in Cornwall and, Cornwall being what it is, everyone’s your neighbour whether you realise it or not. I found a lot of names within ‘Champions’ were people who I’d actually met years ago, local worthies such as Colin Dommet, David Paull, Colin Flashman and Rob Blake to name a few, and many of the others I’ve heard of. I was also pleased to see a profile of Paul Spargo, who was a legend in local hill-climbing when I followed it in the late 1970s and later went on to win several National Championships. If any of you think that watching one guy on a bike riding up a hill is boring they should do themselves a favour and watch an event…

The profiles are illustrated throughout with excellent photographs with an 11 page gallery of colour pictures at the end.

To sum up: a truly excellent book. The only minus being that its local content covers a very small county so it won’t get the readership it deserves. The profiles will be enjoyed by anyone interested in a good tale but ‘keeping it Cornish’ definitely limits its potential readership.

Available from Waterstones in Truro and other bookshops in Cornwall; national booksellers may be able to order it for you.