Richard Green’s money was meant to be spent on a Gold Star. But he ended up with twice as much motor as he originally expected, and now rides a show-winning Beezer twin…

‘I was looking for a 500 single’ says Richard, ‘but when I came across this A65, looking great, in excellent condition, and mechanically sound, I just couldn’t say no.’ Who can blame him? The 1969 BSA 650 twin is arguably one of the best-developed of the breed – and this one in particular is a damn fine looking example.

The A65 arrived in 1962 as the natural progression from the sturdy A10. Given a unit construction twist and sensible technical development, the twin remained the backbone of the BSA range all through the 1960s. In fact, things almost went a little too far in the middle of the decade when there were eleven different models (counting 500s as well as 650s) based around the same basic machine. Eleven! Perhaps there are actually too many ways to skin a cat…? Most customers opted for the 650-sized Lightning anyway, so the range was trimmed to a more sensible size of six before Richard’s own A65L went into production.

The Lightning was accepted as the BSA all-round sportbike of the Sixties, sitting alongside the single-carb, touring Thunderbolt and the supersports Spitfire. If you’re buying an A65 today then you’ll have plenty of different examples to choose from, which reflects how well the bike sold when new. Although Turner’s twins continued to steal many hearts with their glamorous reputation, it was a fully-faired Lightning that was kitted out with car-seeking missiles to take on James Bond in the Thunderball movie. In real life the Police rode something which looked similar, but their Lightnings came without the additional thunder!

By 1969 BSA had tackled most of the A65’s obvious flaws (and the ones which remained required rather more fundamental efforts to improve them). As the multi-cylinder bikes arrived so the pressure could be taken off the twins, and the Lightning was allowed to settle into an almost genteel sports-tourer role while the Rocket 3 took the strain. Amendments to the motor were aimed at making it more reliable, quieter, and less leaky, and any attempt at ultimate top speed was sacrificed to beef up the mid-range and improve rideability. ‘Very fast but easy to handle’ reckoned BSA, and we’d have to agree.

The twin-carb A65 would still reach 108mph (but don’t try that at home children, and particularly not you, Mr Wilson, unless you want to develop a sudden and expensive relationship with SRM). It also offered accurate cornering without feeling overly stiff. Yet even in 1969 it was freely admitted that only a masochist would use a Lightning as an outright speed machine. It excelled as a high speed tourer, however, and still willingly fulfils that role today, if you have the yen to travel in starburst style.

BSA even fitted an oil pressure warning light, intended to reassure riders that all was well with the bike’s lubrication and cooling. It signalled alarm should the oil flow become compromised, ideally before extreme engine damage occurred. However, as the switch itself was prone to malfunctioning, most riders ignored its cries of ‘wolf!’ after a while. BSA’s claim to be ‘ultra reliable under all conditions’ wasn’t quite as accurate as they hoped! 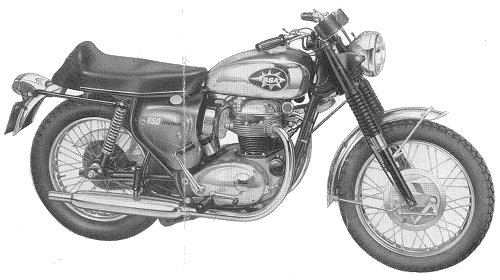 Richard has suffered no such traumas with his Lightning, covering over a thousand miles on it in the year he has owned it. It’s been resolutely reliable, with only one time-consuming incident blotting its copybook. ‘The only time the bike has let me down was when a fuse kept blowing,’ says Richard. ‘This was down to a cable rubbing inside the headlamp, which wore away the outer cover to expose the wire, so it shorted. Took some time to find!’

The A65L cost £3100 to buy, which sounds like something of a bargain given the work that had already gone into it. ‘It was in excellent condition,’ confirms Richard; ‘as it had been rebuilt and well looked after by the previous owner. From the receipts he passed on, about £2500 had been spent on it.’

However, there wasn’t much other information about the bike. Richard would love to know more about the Lightning’s history from before its rebuild – so if you recognise this gleaming machine then now is the right moment to stand up and be counted.

With much of the work already completed, all Richard has needed to do is fine-tune the bike. He fitted a vented 2ls front drum which gives ‘excellent braking’, at a cost of about £200 together with stainless steel spokes and a chrome rim for the wheel. ‘I really recommend this mod,’ he says, reflecting how road-testers felt some 30 years ago. The standard item was reported to feel ‘spongy’ and hard to adjust back in the Sixties, although these days a brake specialist should be able to set it up correctly to suit your style of riding.

Apart from the brake, the A65 has only needed routine maintenance and servicing (‘Burton Bike Bits are very helpful and have the items I’ve needed in stock, with a fast delivery service via post’), although Richard thinks that the gearbox might need attention fairly soon. ‘On some days I seem to have a box full of neutrals!’ They all do that, Sir…

Maybe one day Richard will get his Gold Star, but this BSA twin does him just fine for the time being. It won its class at the Stinkwheel Show at Beaumanor Hall in the autumn of 2003 – take another look at the photo and you’ll probably see why. It’s a show stopper, all right.

Is your bike a potential prize-winner? Enter it for an Andrew Greenwood classic event and find out! 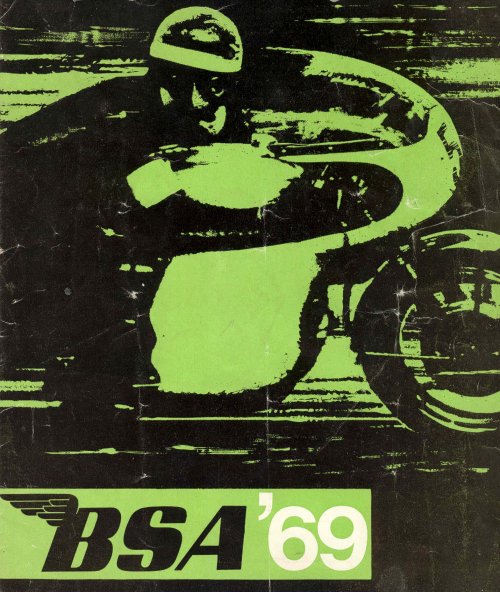