Granville Bradshaw started his career in 1910 designing aircraft, and by 1955 he’d dreamed up the Omega engine with its innovative rotary layout. In between, he tried his hand at oil-cooling…

Long before Suzuki adopted oil cooling for engines in the mid-Eighties, the idea was tried by Lancastrian inventor Granville Bradshaw. He started his career early, designing an entire aeroplane, which used a 40hp water-cooled engine, at the age of 19 in 1910. Then, after creating the ABC horizontally-opposed twin of 1919-1923, so successfully imitated by BMW, Bradshaw came up with his oil-cooled engines for the 1920s.

Aiming for efficiency at a high working temperature without overheating, Bradshaw devised an oil-cooled 500cc fore-and-aft flat-twin for Zenith, but it was only his proprietary 350cc single that was made in volume. It was originally manufactured by James Walmsley of Preston from 1922 to 1925, then tooling was passed to Dorman, the Stafford company known for its diesel units.

Humphries and Dawes, makers of the OK motorcycle in Birmingham, offered a Bradshaw-powered, three-speed hand change model from 1924 to 1928. You may be familiar with Humphries’ later, more famous OK Supreme machines – and indeed, this bike is wearing Supreme transfers on its tank. 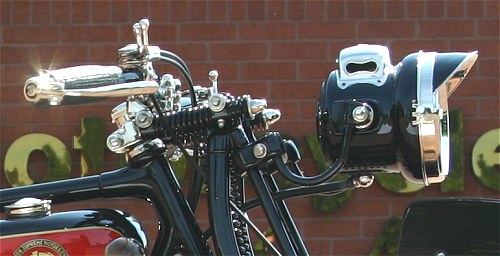 This 1925 Bradshaw with OK’s latest drum brakes, has recently been restored to as-new condition for display at the National Motorcycle Museum. That really means it has come home (almost!), because OK machines were built at Hall Green in the 1920s, before Humphries and Dawes separated and Veloce Ltd took over the Hall Green works.

The Bradshaw engine’s cylinder barrel is devoid of finning. Integral with the crankcase, it contains an iron liner surrounded by a cavity in the alloy casting. Engine oil, stored in a wet sump, is pumped to the big-end from where it splashes up into the cylinder jacket. The iron cylinder head is air-cooled in the conventional way. 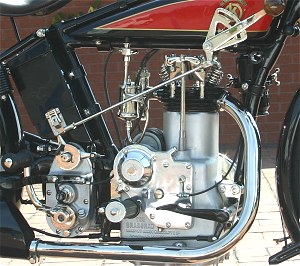 Bradshaw-powered bikes raced in the Isle of Man TT, a Dot Bradshaw outfit finishing fifth in the first Sidecar TT of 1923. But the nickname ‘oil boiler’ that soon stuck to these engines says much about their tendency to overheat when pushed hard…

Like other gentleman’s sports machines of the 1920s, the Bradshaw attracts much attention in use, and the bidding is usually competitive when one hits the open market. A similar machine was sold some six years ago for around £4000; you won’t find one selling for that kind of money now!

If you’d like to see the OK Bradshaw in the NMM collection, alongside hundreds of other vintage and classic machines, then you’ll find them at the Museum which is on the M42/A45 junction. The NMM is open every day from 10am to 6pm (except 24-26 December). Admission costs Adults £6.95, Senior Citizens £4.95, Children (under 15) £4.95, Family Tickets (2 adults with 2 children) £20. See also www.nationalmotorcycle museum.co.uk